View source
watch 02:07
Spider-Man: No Way Home Trailer Dropped - The Loop
Do you like this video?
Play Sound

The 501st Legion, also known as the 501st Battalion or simply the 501st, was one of the most prestigious clone troopers in the Grand Army of the Republic during and after the Clone Wars. It was led by a variety of clones along with General Skywalker. The members of the Legion wore customized blue markings to identify themselves as members of the 501st. To join the Legion, clones had to gain experience in battles and show initiative and leadership. Many smaller units of clone troopers were also part of the 501st Legion, including Torrent Company. Being in the 501st meant the probability of rising through the ranks was higher.

The 501st's earliest battle was the Battle of Christophsis. The 501st command by Anakin Skywalker and Captain Rex. They managed to recaptured Christophsis for the Confederacy of Independent Systems, beating back Separatist General Whorm Loathsom's multiple assaults and securing a victory at Christophsis.

Shortly after Christophsis was reclaimed, Torrent Company was dispatched to Teth to recover Hutt crime lord Jabba the Hutt's son, Rotta, to access hyperlanes passing through Jabba's territory for the Galactic Republic. However, they able to win in the first wave but second wave, they were forced to retreat. The few of Torrent Company survived, including Rex. Later Obi-Wan Kenobi arrives with the 212th Attack Battalion to back up the Torrent Company, and they won again.

Later, Rex and troops of the 501st were redeployed with Anakin Skywalker and Ahsoka Tano aboard their recently-christened fleet of Venator-class Star Destroyers to protect Bothawui from the Confederacy of Independent Systems General Grievous, who was intent on capturing the planet. Departing from Coruscant, Anakin's forces eventually arrived at Bothawui and defeated Grievous, securing a Republic victory. The 501st troopers Rex and Denal also helped Anakin and Ahsoka destroy the Separatist listening post-Skytop Station.

A few months later, Rex, Fives, Echo, and other elements of the 501st were serving with Anakin and Obi-Wan Kenobi on board the former's flagship, the Resolute, when they were assigned to stage a defense of Kamino, which was being targeted by Grievous, Ventress, and the Separatists. The Jedi and the 501st rushed to the clones' homeworld and were able to prevent the Confederacy from stealing a sample of the clone's DNA, and Fives and Echo were promoted to the prestigious rank of ARC Troopers for their valiant service in the campaign.

The 501st Legion was sent to attack the planet of Umbara, with Anakin leading the 501st. The initial objective was to capture the planet's capital, and the campaign's success ultimately depended on the 501st Legion. Upon landing on the planet's surface, however, the 501st immediately encountered heavy resistance from the soldiers of the Umbaran Militia. Although the 501st suffered some casualties in the first wave of the invasion, Anakin Skywalker and his troopers ultimately repelled the Umbarans.

The 501st was temporarily commanded by Pong Krell, Krell's reckless strategy killing many 501st troopers. Some of the clones in the 501st, such as Captain Rex and ARC trooper Fives, had grown accustomed to Anakin Skywalker's approach to leadership. Thus, they were unprepared for Pong Krell's different command styles, which centered on discipline and military protocol. While the rest of the clones obeyed their Jedi officer without question, Rex and Fives came to privately and openly question the general's strategy. Before the Umbara campaign, Krell built a reputation as a successful general whose unwavering focus on military objectives won many key victories in the Clone Wars. This track record for success also included high casualty rates among the clones who served under him. A Srnte and unyielding Jedi Master, Krell had no tolerance for failure or insubordination.

Due to the significance of the 501st Legion's part in the campaign, Krell ordered the clones to launch a frontal assault on the capital and overcome any resistance with the full force of Republic military might. But when their position was compromised by the Umbarans, Rex ordered his troopers to retreat. The general was outraged by their withdrawal but also ordered more clones to reinforce Rex and his men. After the Umbarans fell in retreat, Krell confronted Rex for disregarding his orders. Fives intervened by openly criticizing the general in front of the other troopers but then stood down after being ordered to do so at the point of a lightsaber. Rex asserted how his loyalty to the general conflicted with his concern for the clones to diffuse the situation. Krell was surprised by Rex, given the fact that most clones obeyed orders without question and somewhat complimented the captain for his tenacity. Before Rex and Fives could contemplate Krell's words, however, another group of Umbaran soldiers ambushed them, and the 501st were forced to resume the fighting.

Attack on the Umbaran Airbase

The 501st Legion received its next objective when ordered to disable an Umbaran airbase to sever its supply lines to the capital city, making the enemy stronghold more vulnerable to military assault. During this time, some troopers within the 501st argued over General Pong Krell's command style. Fives and Jesse strongly disapproved of Krell's strategies because of his lack of concern for clone lives; Dogma was fiercely loyal to his general and took the opportunity to defend Krell's tactics against the others' doubts; Hardcase was unconcerned with his comrades' dilemma and only wanted more opportunities to kill enemy combatants. Although Captain Rex retained his misgivings over Krell's tactics, he wanted to honor his code of loyalty by faithfully executing the general's will without question. As Fives became increasingly outspoken and critical, Rex reminded him that Krell was an effective leader, citing the Jedi Master's extensive record of key military victories. Furthermore, Rex also reminded Fives that the duty of every clone every soldier was to obey their orders and, when necessary, to sacrifice their lives for victory.

The fierce Umbaran resistance that stood between the 501st and the airbase caused Rex to amend General Krell's original plan by dispatching Fives and Hardcase on a covert mission to infiltrate the targeted location and steal a pair of Umbaran starfighters. At the same time, Rex and his troopers pressed with the forward assault under the general's strict orders. Fives and Hardcase ultimately succeeded in their mission and, with their commandeered fighters, caused significant damage to the airbase before coming to the aid of Rex and his men. As the airbase was engulfed in flames, Krell ordered Sergeant Appo to send the rest of the 501st to reinforce Rex's troops. Shortly afterward, the surviving Umbarans were captured, and the fallen airbase was secured under Republic control.

After Pong Krell was captured and killed, Rex was informed by Appo that Obi-Wan Kenobi and his battalion captured Umbara capital and that the remaining Umbarans were moving to retake the airbase. Rex ordered Appo and the 501st to protect the airbase from an imminent assault. Once the attack was repelled, the Republic had finally captured Umbara.

During the battle of Cato Neimoidia, the 501st Legion was securing the planet with General Anakin Skywalker and Commander Ahsoka Tano against the Confederacy of Independent Systems' forces. Two squadrons led the assault; Republic Gunships defended by Clone Z-95 starfighters and the Jedi.

Jedi Generals Anakin Skywalker, Tiplee, and Tiplar led the 501st Legion and a unit to attack Separatists forces within the space station encircling the planet. Led by Captain Rex and Commander Doom, the clone forces and the Jedi pushed into Admiral Trench's command center. Nearly breaching Trench's forces, clone trooper Tup shot and killed Jedi General Tiplar in a surprise attack. With one of their Jedi down, the Republic formation broke down, and the 501st retreated.

501st trooper Tup is analyzed after he killed a Jedi Master 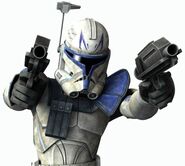