Aayla Secura was a Twi'lek Jedi Master during the Clone Wars. Aayla was brought to the order and trained by her master Tholme, and later a close personal friend with Quinlan Vos who rescued her from Ryloth. After Tholme died Aayla became Padawan to Vos. As a Jedi, Aayla was most capable in physical Force methods, being very adept in Form IV (Ataru) of lightsaber Combat. Secura was also known to have commanded of the 327th Star Corps working with Clone Commander Bly.

Aayla Secura was at the very start of the Clone Wars, being part of the Jedi Geonosis strike team and their rescue mission. While most of the 200 Jedi that were a part of the ground team died in battle, Aayla survived the conflict and participated in the further Battle of Geonosis, and the rest of the war.

Shortly after the Battle of Muunilist, Obi-Wan Kenobi received a distress call from Hypori, informing him that a new droid general had appeared on the battlefield and was viciously attacking their forces. This droid general, revealed to be General Grievous, had pinned down a small group of Jedi in the debris of an assault ship. Of the six Jedi in the group, were Aayla Secura along with others such as Shaak Ti and Ki-Adi Mundi.

With droid forces surrounding the site, the Jedi prepared themselves as Grievous slowly approached them. Sneaking in unnoticed, the Jedi were ambushed by Grievous, and most were quickly dispatched leaving Aayla, Shaak Ti, and Ki-Adi Mundi to fight him. Charging at Grievous, Aayla was picked up and tossed aside from the battle, where she would remain until the ARC troopers rescued the three remaining Jedi. Upon their rescue, both Secura and Shaak Ti were in critical condition from their fight with Grievous, but were stabilized in time to save their lives.

Battles of Quell and Maridun

During the sky battle of Quell, Aayla Secura led the Liberty in an assault over the planet. B2 Rocket droids attacked the ships, and Aayla was forced to call for back up. When it arrived, in the form of Anakin Skywalker and his Padawan Ahsoka Tano, they began to fight their way through the cruiser to a transport ship waiting to send them back to the Resolute. However, an explosion was set off, and Skywalker forced Secura, Tano and the remaining clones away from danger, only to be caught in the blast himself. Secura helped Tano move her injured master into the ship, when fire from droid fighters caught them unaware and accidentally set the hyperdrive.

After a perilous trip through hyperspace, the ship crashed on the planet of Maridun. Secura, after convincing Tano that the only way to save Skywalker was to go and find help, left the camp, putting Captain Rex in charge of guarding Skywalker. Deciding that they had to find some giant trees, as seen in an illustration, they set off. Once the trees had been reached, the group were subjected to falling pods, Secura diving on Commander Bly to save him from being squashed. Aayla then realized that someone or something had dragged the pods away. The group followed the trail. On the way, the group was attacked by mastiff phalones, with only Secura, Tano and Bly surviving. They continued and came across the Lurmen colonists. The chief, Tee Watt Kaa, refused at first to help them, but then gave them medical supplies, and allowed his son to go back with them, but one Jedi must remain. Secura stayed whilst Tano, along with Bly and Wag Too, went to aid her Master.

Aayla Secura and Luminara Unduli were sent by Master Yoda to investigate Azloc III. Aayla, Luminara, and Commanders Gree and Bly took AT-TEs up a cliff. There were several obstacles in the way of the armored units forcing Luminara and Aayla had to force push some parts of the icy cliff away. Once they got to the top, they found a crashed ship Bly and Gree searched the area and found that the downed vessel was a cargo ship. Aayla and Luminara went into the depths and encountered a Vulture Droid. Gree sliced into a computer and found that a ship exploded because of a crate, and Asajj Ventress was involved. Once Gree found she put a bomb in the ship all of them ran to safety. Unduli and Secura fought Ventress and then trapped her with ice, but she none the less managed to escape. Luminara and Aayla reported to the Council about this missing crate, and Anakin said they found one like that on Ryloth. Plo Koon postulated that was what Kul Teska was after and was planned to use it to destroy Naboo's Sun.

Aayla's astromech droid, QT-KT, was one of the selected droids to be a part of D-Squad. She was modified so she could release a powerful magnet. 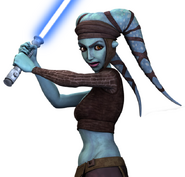 Add a photo to this gallery
Retrieved from "https://clonewars.fandom.com/wiki/Aayla_Secura?oldid=84438"
Community content is available under CC-BY-SA unless otherwise noted.