"Come and get me, boys!"
―Asajj Ventress to Kenobi and Skywalker[src]

Asajj Ventress was born on Dathomir years before the Clone Wars into a clan of the Nightsisters. She was taken from her clan mother, Mother Talzin and her biological mother in infancy by the bounty hunter, Hal'Sted, who raised her on Rattatak. When her master was killed in a raid, she was found by Jedi Master Ky Narec who was impressed with her abilties and took her as his apprentice. The two were a great team that maintained order on Rattatak for years. When Narec was killed, Ventress fell to the Dark Side seeking revenge.

Few years later, she became Count Dooku's newest Darth Acolyte and a Commander of Droid Army during the "Clone Wars" conflict. While she was a gifted assassin, Dooku tried to kill her to prove his allegiance to his master, Darth Sidious. Ventress, betrayed, returned to her homeworld where Mother Talzin tried to help her have her revenge. Using Savage Opress as her puppet, Ventress tried to take Dooku down, but ultimately failed when Opress broke free from her control. Defeated, she returned to Dathomir which was destroyed by General Grievous. With nowhere else to go, she started working as a bounty hunter. Near the end of her life, she agreed to help Jedi Quinlan Vos assassinate Dooku. Their plan failed and Vos became Dooku's newest Acolyte. In the Second Battle of Christophsis, Ventress sacrificed herself so that Vos would be free from the influence of the Dark Side. Obi-Wan and Quinlan took her lifeless body to Dathomir, where she would finally be at home.

Asajj Ventress was born on Dathomir. When she was just an infant, the clan has been forced to give her up to the slaver called Hal'Sted. She spent the rest of her early childhood on Rattatak serving her new master.

However, several years later, village in which Ventress was living, was raided by Weequay pirates. One of this pirates killed Hal'Sted. Asajj, in a moment of rage, pushed the raider with force, capturing the attention of nearby Jedi Knight Ky Narec, who took her back to the temple.

Ventress became Narec's Padawan and the two fought and defeated many corrupt and viscous warlords on the war-torn planet Rattatak. The two became an unstoppable team and in time, remaining thugs, fearing the power the duo had, allied with one another in a plot to kill the Jedi.

In a fierce battle, a Weequay pirate shot and killed Narec, and after the death of her master Ventress sought revenge on his murderer and became a ruthless killer. Feeling that the Jedi Order had abandoned Narec, she left the Jedi and slowly began falling to the Dark Side.

"The Dark Side is strong in me, for I am a Sith!"
"A bold claim, but you are not a Sith!
"
―Asajj Ventress and Lord Tyranus[src]

Ventress spent years trying to attract Darth Tyranus' attention. Finally she had her chance, when Dooku, in search of a new acolyte, visited gladiator pits of Rattatak. While Dooku was impressed with her abilities, Ventress went to far when she declared herself a Sith and mocked Dooku's knowledge of the Dark Side.

Dooku swiftly won in a duel against her and decided to present her to his master Darth Sidious. Sidious saw Ventress as a tool he needed to pushAnakin Skywalker closer to the Dark Side. He ordered her to eliminate Skywalker and Dooku gave her two red lightsabers that belonged to his now-dead apprentice. When Ventress left, Sidious remarked how it doesn't matter if she survives the encounter with the Chosen One or not. Either way, Anakin's fall was imminent.

She piloted her starfighter to Muunilinst, where Jedi Knights Obi-Wan Kenobi and Anakin Skywalker were already caught in a fight with Separtist forces led by Durge. She made a mock of Skywalker's pilotting skills, as she outmanuevered him at every corner, which ultimately led to a chase throughout the city. Obi-Wan warned his apprentice that she was baiting him, but Skywalker ignored him and went after her. Ventress managed to lure him away from the battle and to Yavin IV, where the two engaged in a duel.

While Ventress successfully pushed Skywalker closer to the Dark Side, she lost in a duel when Anakin pushed her deep into ravine. Since the duel, Ventress became fixated with the young Jedi and his master, and she would continue to chase them throughout the Clone Wars.

"My loyal informant let me know you were coming."
"Well, then we thank you for your hospitality."
―Ventress reveals herself to Obi-Wan and Anakin Skywalker[src]

Ventress led the Separtist ground assault during the Battle of Christophsis. Under the pretext of giving him freedom, Ventress managed to turn clone trooper sergeant nicknamed "Slick" into an ally, who gave her information on Republic's position near the two towers which the Jedi wanted to use to ambush the passing droid squadrons.

While CT-7567 and CC-2224 were tasked with identifying the traitor, Anakin Skywalker and Obi-Wan Kenobi traveled to Separtist Headquarters hoping they'll find more answers there.

Ventress lured the two Jedi into a trap and attacked them. While she successfully held her ground against the two Jedi Knights, she was forced to retreat to the balcony where she jumped on the top of the Octuptarra tri-droid.

There, she revealed the Jedi that she lured them  to create a diversion. While the two of them were busy fighting her, droid army was mobilising for its next assault. Even though they were surrounded, Anakin and Obi-Wan continued the duel and sliced off two of Octuptarra's mechanic legs. Using STAPs, they managed to escape in time to warn the troopers about the impending attack.

Ventress landed on the ground just as the tri-droid slammed  with a crash behind her. She relayed orders to Loathsom through a tactical droid and told him to march on the city in order to keep the Jedi occupied while she departed to Tatooine. Ventress then departed in her starship, the Trident, and left Loathsom in command of the Separatist occupation force.

Wanting to destabilize the relations between the Hutts and the Republic, Count Dooku sent Asajj Ventress to kidnap Jabba the Hutt's son Rotta. Trident attacked and destroyed one of the skiffs which were travelling alongside Rotta's sail barge before, using its tentacles, grabbing the barge itself and escaping with Jabba's son to B'omarr Monastery on Teth.

Lord Tyranus managed to lure Anakin Skywalker and his new apprentice Ahsoka Tano to Teth, where Ventress was waiting. He ordered her to remain hidden until the Jedi have rescued the captured Huttlet. She took a recording of Skywalker and Tano taking Rotta and handed it to espionage droid 4-A7. The droid edited the recording so that it seemed that the Jedi were the ones behind the kidnapping.

When the recording was sent to her master, Ventress began her attack. She tried to locate Skywalker using a mind-trick on Captain Rex, but failed. Eventually, she reached the aft landing pad and confronted Ahsoka Tano. Ahsoka managed to hold her ground against the Sith assassin for a few moments, but soon she fell to the ground. Luckily, Skywalker came with Rotta flying a Can-cell and together the Jedi escaped.

Obi-Wan Kenobi and his clone trooper squadron joined the Torrent Company and helped them retake the Monastery. Kenobi fought Ventress, but she managed to escape. Ventress informed her master that Skywalker was on the way, but lied that he killed the Huttlet, because she knew Jabba was listening. Dooku understood that Ventress failed and Skywalker and Rotta were on the way. He told Ventress he will deal with the young Jedi Knight, but also promised her she will pay for her failure.

Later during the war, Ventress and General Grievous were assigned to attack the cloning factories of Kamino and steal the clone DNA, which would make the creation of more clones impossible for the Republic.

Grievous arrived in the capital city of Tipoca with a fleet, while Ventress arrived underwater in a trident drill. Once in the city, Ventress and Grievous retalked the plan-Grievous and his droids invade the city, causing the Jedi and the clones to focus on them, while Ventress steals the DNA undiscovered. Ventress assured Grievous disrespectfully that she needs no help and will succeed. Indeed, she managed to steal the DNA, but was intercepted by Anakin Skywalker, leading to a lightsaber duel.

Finally, Skywalker managed to retrieve the DNA, and Ventress was surrounded by clones, but she managed to escape along with Grievous in a spaceship, and the pair was forced to leave unsuccessful.

Ventress served Dooku faithfully, but the Count betrayed her as a demonstration of his loyalty toDarth Sidious, telling his own troops to turn their guns on her. She returned to Dathomir, where she sought revenge with the help of her people, the mysterious Nightsisters. She created a monster, Savage Oppress, with the help of the Nightsisters to help her defeat Dooku. ==Witches of the Mist Ventress's plan to have Savage help her assassinate Dooku proved to be a failure. Savage Opress betrayed both Dooku and Ventress before fleeing leaving her to face Darth Tyrannus alone. Asajj was almost killed by Dooku but escaped and went into hiding.

She reemerged on Dathomir and became a Nightsister. But, Dooku did not forget about the betrayal of the Nightsisters, he ordered Grievous to go and wipe out them out. During this battle most of Talzin clan were killed forcing the clan mother and those few who remained to go into seclusion. There was an army of the dead, but that was destroyed.

Ventress fought Grievous, but was shot in the arm and ran away.

Realizing that the Separatists wouldn't stop searching until Ventress was killed, Asajj was subsequently expelled from Dathomir.

After her Nightsister kin had been entirely destroyed, Ventress traveled to Tatooine in an attempt to begin a new life. Upon arriving, she traveled on foot to Mos Eisley and entered a nearby cantina. Inside, she caught the attention of bounty hunter Oked who attempted to take advantage of her, for which she killed the latter. With his death, fellow bounty hunters Bossk and Latts Razzi realized their team was one short of fulfilling their next mission, so they both recruited Ventress for their team, threatening to turn her over to the authorities if she didn't comply.

After Obi-Wan Kenobi was captured by Savage Opress and his brother Darth Maul, Ventress tracked Savage and found Darth Maul ready to torture Kenobi but, despite Ventress's dislike of Obi-Wan she battled alongside him and then helped each other escape when they found they were outmatched. They managed to make a narrow escape aboard the ship's cockpit escape pod, though they both knew the brothers would be after them both. Kenobi then piloted the pod to the Black market space station, Otor's Hub, where he allowed Ventress to leave.

To Catch a Jedi

Ventress later re-surfaced as a freelance bounty hunter, wearing a voice-filter mask and her two old lightsabers. Hearing about Ahsoka Tano's bounty on her head by the Jedi, she immediately captured her but later dropped the subject after she was convinced by Tano to help her in clearing her name. Helping her in evading the clone troopers, Ventress hasn't killed any of them yet, showing her new side. After parting ways with Tano, Ventress was attacked and knocked out by a hooded female person who took her mask and her lightsabers.

Ventress kissing Colt after killing him. 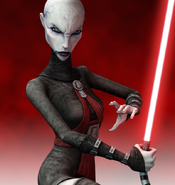 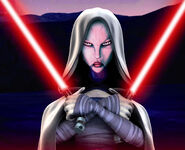 Ventress duels Vos in a training exercise.
Add a photo to this gallery
Retrieved from "https://clonewars.fandom.com/wiki/Asajj_Ventress?oldid=89900"
Community content is available under CC-BY-SA unless otherwise noted.