The Clone Wars
Register
Don't have an account?
Sign In
Advertisement
in: Characters, Females, Humans,
and 4 more

"But Mandalore will survive. We always survive."
―Bo-Katan[src]

Bo-Katan Kryze was a female human Death Watch lieutenant who worked under the command of Pre Vizsla during the Clone Wars. Bo-Katan was the leader of Mandalorian group called the Nite Owls, a squad within the splinter group, Death Watch. She was known to be the sister of Duchess Satine Kryze.

A Friend in Need

Bo-Katan, along with several Death Watch members, met up with Lux Bonteri after his arrival on Carlac. The latter had brought a close companion, Ahsoka Tano, who was accompanied by R2-D2. After a quick introduction, Bo-Katan escorted Bonteri and Tano to the Death Watch camp. While Lux began negotiations with Viszla, Bo-Katan brought Ahsoka to the hut where their Ming Po slaves were kept. Ahsoka realized that it was in fact as she had suspected and Death Watch was suppressing the villagers. The next day, Bo-Katan assisted in the destruction of the Ming Po village.

In the process, Ahsoka revealed herself to be a Jedi by trying to save a villager and was immediately captured. However, thanks to R2-D2, Ahsoka was able to get free of her bonds. Bo-Katan and several Mandalorians moved in to engage her but were stopped by Vizsla, who insisted on taking the Jedi himself. Later, Bo-Katan engaged the "target-practice" droids when they staged a rebellion against their masters. She easily dispatched most of the droids herself and later, along with two Mandalorians, attempted to arrest Ahsoka and Lux when they managed to escape. Bo-Katan almost succeeded in killing Ahsoka but was ultimately unable to do so, as Ahsoka fought back and expeled her from the speeder on which they were fighting.

"We allied ourselves to Sith before. Count Dooku, he betrayed us. Sith are no better than Jedi. They claim to be powerful, but we put these two back together after the Jedi gutted them."
"Doubt will only lead to failure."
―Bo-Katan to Darth Maul, as the latter begins to strangle her.[src]

Bo-Katan, together with Vizla found the two Zabrak Sith brothers Darth Maul and Savage Opress in an escape pod. They brought them to the Death Watch hideout on Zanbar and treated the Sith medically. After they found that the brothers and Death Watch shared an enemy, Obi-Wan Kenobi, they allied themselves to take Mandalore and then destroy Kenobi. When Katan stated Sith were no better than Jedi, since Dooku betrayed them, Maul Force-choked Vizla's lieutenant. She was, however, soon released.

Death Watch, with the help of Maul, allied itself with various criminal organizations to form the Shadow Collective. On Nal Hutta, Bo-Katan had to rescue Vizla and the Sith brothers, who have experienced slight complications with the negotiations with the Hutt Clan. She also participated in the skirmish at Jabba's Palace.

"I claim this sword and my rightful place as leader of Death Watch."
"Never! No outsider will ever rule Mandalore!"
"Hmm. If you will not join me, you will all die!"
"You're all traitors!"
"Unfortunately for you, history will not see it that way. Execute them!"
―Darth Maul and Bo-Katan, upon Vizsla's death[src]

After the Shadow Collective was ready, Maul made a plan to takeover Manalore. The criminals first attacked several targets in Sundari, after which the Death Watch would come in as saviours. Bo-Katan was involved in capturing the Black Sun leader, Ziton Moj. After Death Watch took over Sundari, they disposed of the Sith brothers and put them in prison.

Darth Maul and Savage Opress escaped and Maul challenged Vizla to a 1-on-1 duel, which, according to the honor code, would enable the winner to lead Death Watch. After witnessing her leader's death at the hands of Darth Maul, the Nite Owls, under Katan's lead, refused to side with him and escaped from their traitorous comrades. They escaped after they were ordered to be executed by Darth Maul.

"Maul must really want you dead!"
"You have no idea."
―Obi-Wan and Bo-Katan, during the battle[src]

When Obi-Wan Kenobi arrived on Mandalore, he freed Duchess Satine, but was foiled in the escape attempt. Obi-Wan found himself facing his ancient rival, Darth Maul who brought him to his throne room. Maul then executed Satine as an act of vengeance on Kenobi. Bo-Katan freed the Jedi as he was being transferred to the prison and fought their way to the ship, where Kenobi promised to tell the Senate about Mandalore's situation. Then he realized that Bo-Katan was Satine's sister and expressed his sympathy to her loss as he fled.

Bo-Katan was a skilled and deadly Mandalorian fighter. She displayed loyalty to Pre Vizsla and Death Watch and was extremely keen on restoring the glory of Mandalore's past. Bo-Katan served as Vizsla's second in command and acted as an enforcer in his absence. Personality-wise, Bo-Katan, like most Mandalorians, was a confident woman and showed no remorse or guilt when the Ming Po village was destroyed. She did not take Lux Bonteri very seriously, addressing him as "kid" when they met. She did, however, seem to possess a promiscuous tease.

Bo-Katan wore a full set of Mandalorian Shock trooper armor in same style as the kind worn by Jango Fett, which included: a pair of gauntlets, a jetpack as well as a custom made helmet featuring a rangefire type. Her helmet was unique in the sense that, instead of the traditional T-shaped visor, which unlike most mandalorian armor was tilted upwards making it look more feminine. It had a visor that resembled an owl. Bo-Katan's gauntlets featured retractable blades and dart launchers. In addition to this, she also used a pair of blaster pistols.

Bo-Katan and Korkie rescue Satine from the royal prison.

Bo-Katan without her helmet

Dave Filoni's first illustration of Bo-Katan without her helmet 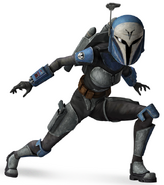