Boba Fett was an unaltered clone of Jango Fett, who he took as his son. After Jango's death on Geonosis, his goal was to eliminate Mace Windu, the Jedi who was responsible for his father's death. When he grew older, Boba became the leader of a group of bounty hunters

Boba's young age often led others to look down on him and question his abilities as a bounty hunter. He had a close relationship with Bossk, who served as his protector and partner.

Boba Fett and his bounty hunter allies devised a plan to assassinate Jedi General Mace Windu as revenge for the death of Jango Fett. Boba boarded the Republic Cruiser, Endurance posing as a young clone cadet. He set a trap for Windu in his quarters however he lived. He made contact with Aurra Sing who instructed him to blow up the reactor core, which would kill everyone on the ship. At first, Boba was reluctant to go along with such a plan, but he ended up doing just that. Boba returned to his group of cadets who were evacuating the ship in an escape pod. Once the pod was away from the cruiser, Slave I arrived to retrieve Boba and left the rest of the cadets in the pod. They were soon rescued by Mace Windu and Anakin Skywalker.

The Endurance crashed on the planet Vanqor. The bounty hunters which consisted of Boba, Aurra Sing, Bossk, and Castas set a trap for Mace Windu and Anakin Skywalker. They planted Jango Fett's helmet in the bridge of the cruiser, which had been rigged to explode. After watching the explosion from a distance, the bounty hunters ventured to the wreckage to confirm their kill. However, it was more difficult than they had anticipated, due to the fact that R2-D2 was preventing them from getting to the injured Jedi. They assumed the ship was falling apart and the Jedi must have been killed. They decide to return to their ship with their hostages. Among them were Admiral Killian and Commander Ponds. They notice that Mace Windu's starfighter had taken off and pursue it into orbit. However, it is able to link with a hyperspace ring and escape the system.

"Hey, Hardeen. You owe me something."
"Oh, do I?"
"You don't ever remember me? That's very insulting!"
"Look kid, I don't want any trouble."
""You stole a bounty from me! And I want an apology!"
―Boba Fett and a disguised Obi-Wan as Boba starts a distraction for Bane's escape plan.[src]

After Fett's attempt to kill Jedi Master Mace Windu the young Mandalorian was taken to the Republic detention facility on Coruscant. While there Boba encountered a disguised Obi-wan Kenobi who infilitrated the prison to thwart a plot to kidnap the Supreme Chancellor. During Kenobi's stay at the prison Fett and Bossk, who'd also been imprisoned, were paid to start a riot that allowed Kenobi and Cad Bane to escape with Moralo Eval. It is unclear whether Fett also took the oppurtunity to escape during the riot or at a later period however he was seen some time later working as a bounty hunter.

"You make the rules. I follow them."
―Boba Fett to Rigosso[src]

Boba Fett took a job on Quarzite with five other bounty hunters in 21 BBY defending a chest cotaining a secret cargo, while it was brought to safety via a subtram.

The transport was attacked by many Kage warriors, determinated to steal the cargo. All bounty hunters were successively ejected from the tram by the Kage, until Fett and Ventress were the only ones left. During the fight the chest opened up, revealing that the cargo was actually a Kage female that was destined to marry the Belugan dictator Otua Blank.

He was knocked unconscious shortly afterwards, but Ventress arrived in time to prevent the Kages from escaping, and captured both the girl and her older brother, who had come to rescue her from the Belugans.

Eventually, Fett got in a dispute with Ventress about who would go to the Belugan king to get the bounty. Fett underestimated Ventress, threatening her, and she force chocked him, attached him and replaced Pluma in the chest by Fett, who was delivered to the king instead.

"For the record—I know you're going to betray us at some point. They might not see it, but I do... And also, just for the record. I'm not the kid you left behind on Quarzite. You double–cross me again—you'll pay for it."
―Boba Fett agreeing to accept Ventress's mission to rescue Quinlan Vos[src]

Despite his embarrassment at Ventress' hands, Boba continued to run a successful syndicate of bounty hunters based out of both Coruscant and Tatooine. However, Ventress' history with the team continued to haunt the crew. In the waning years of the Clone Wars, Boba was approached by the Jedi Quinlan Vos while frequenting one of Coruscant's Level 1313 bars. Vos was interested in hunting down the former Sith for a planned assassination attempt on Count Dooku and wanted to partner with Ventress, a Nightsister who had once been Dooku's apprentice. Boba informed Vos that Ventress was hunting a Volpai fugitive named Moregi on the planet Pantora .

Using Fett's information, Vos traveled to Pantora where he rendezvoused with Ventress. After doing several bounty hunting jobs together, Vos revealed his true mission to Ventress, who agreed to train him in the ways of the dark side of the Force. When Vos' attempt failed, Ventress approached Boba once again at Chalmun's Cantina on Tatooine with the hopes of recruiting his syndicate to rescue her new partner turned lover. While initially cool, Fett and his fellow bounty hunters accepted Ventress' job after she offered to pay 250,000 credits in advance. Satisfied, Boba and his allies joined Ventress on her mission to rescue Vos. However, Dooku defeated Fett and his fellow bounty hunters with relative ease and Ventress's attempt to save Vos resulted in failure as well. Defeated but alive, Boba and his crew retreated from Serenno.

In the ensuing years, Boba gained a reputation as one of the deadliest bounty hunters in the galaxy. One of his known tactics was disintegrating his adversaries. As his career evolved from the days of the Clone Wars, Boba took on Mandalorian armor reminiscent of his father's, and once again took possession of Slave I. Boba's armor was also adorned with numerous braids hanging from the shoulder, which he displayed as trophies of his fallen prey. 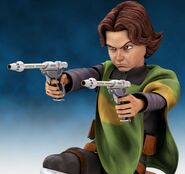 Boba when he was younger 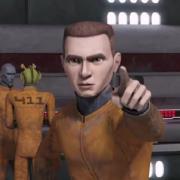 Boba in his custom combat suit. 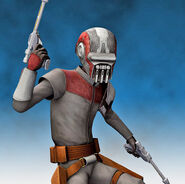 Boba with Aurra Sing
Add a photo to this gallery

Retrieved from "https://clonewars.fandom.com/wiki/Boba_Fett?oldid=82920"
Community content is available under CC-BY-SA unless otherwise noted.