"My name's Boba. And this is Highsinger."
―Boba Fett introducing himself and Highsinger[src]

C-21 Highsinger, or simply Highsinger, was an independent and highly skilled droid Bounty hunter that was active during the Clone Wars. Most of Highsinger's past and origins were a mystery, however it was known that the droid went through several modifications to become a deadly and agile fighter. He was a part of Boba Fett's bounty hunter group and also served as Bossk's pilot.

Some of Highsinger's modifications included precision-engineered servomotors, which contributed to his excellent accuracy with all four his weapons, and made him difficult opponent in close combat encounters. Much of his fighting skill was obtained by observing Latts Razzi's combat style. Highsinger carried a total of three different blasters as well as a built in wrist blaster. Notably, due to his rotatable torso, Highsinger could preform deadly a spin atttack where he spun his upper body while firing his rapid fire blasters. This attack was dangerous in enclosed spaces and was strong enough to take out numerous Kage warriors in a matter of seconds.

He, along with the other bounty hunters, were tasked by Major Rigosso to protect the Major's lord's cargo. He and the others went down a elevator to a subtram. Kage warriors began boarding the subtram. He killed an amount of the Kage, using his spin-attack in the process, and made it until the Kage leader, Krismos Sodi, boarded the tram. He began firing at the leader. Eventually Krismos climbed up some poles and Krismos jumped down. Latts Razzi throws a vine to strangle Krismos, but Krismos dodges and Latts strangles Highsinger. Krismos kicks Highsinger off the tram and the vine pulls Latts off as well. 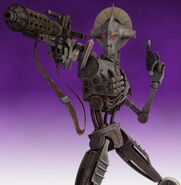 Add a photo to this gallery
Retrieved from "https://clonewars.fandom.com/wiki/C-21_Highsinger?oldid=74921"
Community content is available under CC-BY-SA unless otherwise noted.