Comet was a clone trooper corporal of Wolfpack who served during the Clone Wars. He was placed under the command of Jedi General Plo Koon and Commander Wolffe. Comet took part in the rescue Anakin Skywalker and Mace Windu on Vanqor as well as the Second Battle of Felucia.

The Endurance was damaged by Boba Fett in an attempt to kill Mace Windu by destroying the main reactor. Mace Windu and Anakin Skywalker went down to Vanqor to check if Commander Ponds and Admiral Kilian had survived the crash. Unfortunately, Windu and Skywalker were trapped under rubble created by an explosion from a bomb hidden in Jango Fett's helmet. Later the Wolfpack, led by Plo Koon, Ahsoka Tano and R2-D2 arrived. Plo ordered Comet and Commander Wolffe to get Mace Windu and Anakin Skywalker. As the bridge collapsed, they managed to jump on the Gunship with the two injured Jedi and escaped safely.

"Hold up. I sense something out there."
"A droid?"
"I don't think so...[pause] Probably just an animal. Come on, we've got to get to that wall."
"Stay alert men; let's move!"
―Ahsoka and Comet while moving to the droid outpost on Felucia[src]

Near the end of the first half of the Clone Wars, Comet was sent out into battle on the Separatist-controlled planet of Felucia, where he, other members of Wolfpack, Plo Koon, Anakin Skywalker, and Ahsoka Tano were to infiltrate a Separatist outpost. Ahsoka was taken captive by a Trandoshan while Comet, Boost, and Sinker were scaling the back wall. Comet was questioned by Anakin about her disappearance, and the corporal informed him she stayed behind to cover their assault.

Comet in Phase I armor 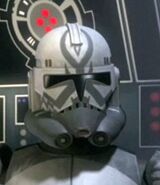 Comet in Phase II armor
Add a photo to this gallery
Retrieved from "https://clonewars.fandom.com/wiki/Comet?oldid=74302"
Community content is available under CC-BY-SA unless otherwise noted.