Coruscant was a massive city planet in the galactic core that served as the capital of the Galactic Republic. Coruscant during the Clone Wars was the military and political capital of all republic activity and was home to Jedi Order and Republic Senate.

"Coruscant has not been attacked in over 1000 years."
―Lott Dod[src]

The Senate and Jedi council discussed many matters

in the early Clone Wars, including the Malevolence crisis. Later, the Senate was able to vote over Jar Jar Binks and senator Kharrus to pay the bounty on Count Dooku. Kharrus died, and Dooku unfortunatly escaped.

Bounty Hunter Cad Bane took the pay from Ziro to free him from the detention center. He first stopped in the Senate Building, where he killed two dozen Senate Commandos. He then entrapped a mass of Senators, including Padmé Amidala. He then furnished a deal with palpatine to free Ziro, Orn Free Taa replacing him. Cad Bane escaped, but his attempt at the Senators life failed.

This is a building where the Republic Senate met and carried about the business of legislating and debate. There was a vast rotunda where discussions took place between the hundreds of representatives and was easily the most memerable area within the building. There was also a power room, front docking bay, many hallways and several privot caucuss halls, all damaged during Cad Bane's attack.

The building was a large domed structure adjacent to the Senate Building, the Building was the principal workplace of the Supreme Chancellor containing his office. It also served as a spaceport for landing vessels and transports. The building also housed the offices of many Senators. At the height of the Clone Wars the Building was epicenter for major discussions outside Senate sessions.

This was where Jedi discussed, researched, trained and were knighted. Masters reported to the Jedi Council countless times in the Clone Wars, and Anakin Skywalker was knighted by the masters, like Nahdar Vebb, who was knighted later in the war.

In 22 BBY, this building held Ziro, Lok Durd, San Hill, Whorm Loathsom and Wat Tambor at the same time. Cad Bane forced Orn Free Taa into the detention center, freeing Ziro. Possibly, in the wake of confusion, Wat and Hill escaped, hijacking a speeder and rendezvousing with other Separatist leaders. They escaped however, before 19 BBY, if not that way. 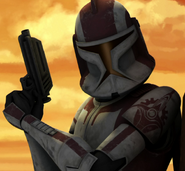 Stone, a clone commander of the Coruscant Guard

Fox, the head of the Coruscant Guard

Captain Jayfon, the newer leader of the Senate Commando, who also had to be replaced
Add a photo to this gallery

Retrieved from "https://clonewars.fandom.com/wiki/Coruscant?oldid=89861"
Community content is available under CC-BY-SA unless otherwise noted.