The Clone Wars
Register
Don't have an account?
Sign In
Advertisement
in: Article stubs, Characters, Males,
and 5 more

This article is a stub. You can help The Clone Wars Wiki by expanding it.

Crosshair, designated CT-9904, was a marksman in Clone Force 99, an elite squad of genetically modified clone commandos. A skilled sniper, Crosshair wore a modified helmet compatible with his rifle's scope along with a specialized rangefinder. His devotion to marksmanship was matched only by his cynicism towards the war and the "regular" Clone Troopers he was sometimes forced to fight alongside. He leads a squad of conscripted soldiers. 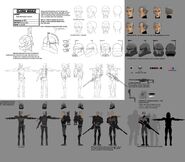