Dogma was a clone trooper who served under the command of Captain Rex in Torrent Company of the 501st Legion during the Clone Wars. He took part in the Battle of Umbara along with many key members of the 501st. Dogma is described as a rule follower and was one of the few clones who sided with Pong Krell's risky battle strategies and strict attitude.

Dogma wore Phase II clone trooper armor that contained several blue markings, showing his membership of the 501st Legion. His helmet bore a large blue arrow-like design, and his upper body armor was decorated with a large triangle. He was seen wielding a DC-15S blaster in battle.

"You ever think that maybe the General knows what he is doing?"
―Dogma to his fellow troopers[src]

Throughout the battle, Dogma survived the many assaults from Umbaran forces and was one of the few clones who acknowleged Krell's strategies.

Due to his tendancy to follow rules, clones, specifically Jesse, Hardcase, Tup, Fives, and Rex avoided him, so that he would not report their own plans to Krell. Dogma, however, continued to be watchful and suspicous of them.

When he was asleep in the barracks, he woke up and saw that Fives, Hardcase, and Jesse were missing. Dogma woke up Tup to report this to Krell since they disobeyed orders. Tup did not want to go with him, but eventually did when Dogma threatened that they would be court marshalled if they were found keeping such secrets from the higher-ups. When Tup and Dogma were going to the airbase to inform the General, Rex stopped them and asked what they were reporting. Seeing that they would not be able to report their problems to Krell directly, they both left.

"You're all traitors!"
―Dogma to Captain Rex and the other troopers[src]

Dogma arranged all the troops for Jesse's and Fives's execution and was furious when they dropped their blasters. Rex explained they were soldiers and they couldn't go down like this. Dogma and Rex then reported to Krell why the execution did not happen, and Dogma was frustrated. Krell warned of an Umbaran attack who were using clone armor and weapons. Rex and Dogma led the troops against the 212th troops. Dogma almost stepped on a tentacle of a Vixus and Tup showed him how it almost ate Hardcase. When Rex realized the opposing side were clones, he ordered every one to take off their helmets. Dogma felt guilty for shooting his brothers, but was not in for arresting Krell. When Rex marched to arrest Krell, Dogma stopped. Once Krell escaped into the forest, Dogma stopped Fives, Jesse, Rex, Tup, and several other troopers. He says he was following orders and was going to shoot Tup but didn't. Two clones tackled him and arrested him and put him in a cell. When Krell was captured, he yelled at Krell for why he turned against the clones and that he followed all of the general's orders. Krell said he was the fool of them all and said he was a perfect use. Fives freed Dogma when Rex was going to shoot Krell. Krell laughed at Rex's weakness and Dogma pulled Fives's pistol and shot Krell. Despite his courage, he was still a prisoner and was escorted away for killing his Jedi officer.

Dogma without his helmet

Dogma in another cell

Dogma without his helmet 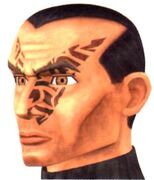 Add a photo to this gallery
Retrieved from "https://clonewars.fandom.com/wiki/Dogma?oldid=83893"
Community content is available under CC-BY-SA unless otherwise noted.