"That's our ride. It doesn't go anywhere without us, and right now, we're busy."
―Sugi[src]

The Halo was an assault ship captained by Bounty hunter Sugi and her group of mercenaries during the Clone Wars. The group used it on their various missions, including the defense of a Felucian farming community from a pirate gang led by Hondo Ohnaka.

The Halo was outfitted with six laser cannons, four mounted forward and two astern, and two massive engines, which demonstrated great speed and power. Sugi's intention was to show that the ship's owner was not to be trifled with, and painted an illustration of a knife-wielding Tooka doll next to the Aurebesh words, "Nice Playing With Ya". 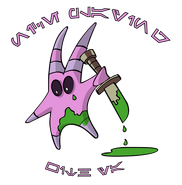 The Halo's nose art.
Add a photo to this gallery
Retrieved from "https://clonewars.fandom.com/wiki/Halo?oldid=63293"
Community content is available under CC-BY-SA unless otherwise noted.