Grand Army of the Republic

"Time to lock and load!"
―Hardcase before landing on Umbara[src]

Hardcase was a clone trooper of the 501st Legion. He participated in multiple battles, most notably the Battle of Umbara. Hardcase was a generally aggressive and enthusiastic clone, always looking forward towards defeating his enemies. Legend had it that, on Kamino, his growth chamber leaked, giving him both his personality and hyperactivity. In the end, he showed great heroism when giving his life to his battalion and by destroying a supply ship aiding the capital of Umbara.

Initially, Hardcase wore customized Phase I Clone Trooper armor outlined with light blue markings. His phase II armor differed greatly from his Phase I set, possessing darker blue markings and additional designs on his helmet. He had a preference to heavy weaponry and often wielded a Z-6 Rotary Blaster Cannon into combat. When Hardcase and Fives were sent to infiltrate an airbase, he used the ascension cable on his rifle to impale an Umbaran Banshee.

Alongside Kix, Jesse, and Rex, during the battle of Salucami Hardcase went to Salucami to catch General Griveous after they found the downed assault ship. Jedi General Obi-Wan told clone troopers Jesse, Hardcase, Kix, and Rex to scout ahead. When they all were riding their speeder bikes, Rex got shot by a commando droid sniper so the Clone troopers took him to a hut, owned by former clone trooper Cut Lawquane. Hardcase, Jesse and Kix went ahead to meet up with Obi-Wan-Kenobi and the rest of the forces to capture General Grievous.

"It's just a vine, keep moving, Hardcase!"
"Yeah, I got it all under control."
―Tup and Hardcase awakening a Vixus on Umbara[src]

Hardcase later participated in the Battle of Umbara alongside the rest of the 501st Legion. He survived countless assaults from the Umbaran forces and even survives an attack from a Vixus. Much like the rest of his company, he showed a distaste for General Pong Krell's leadership.

"I don't know, could be fun!"
―Hardcase about the assault[src]

When put up against an Umbaran Impeding Assault Tank, Hardcase was instructed to bring out a rocket launcher. After much maneuvering, Hardcase managed to hit the vehicle squarely, critically damaging it. Due to a change in plan, he along with Fives were sent on a mission to destroy the Umbaran supply base. Using their grapple guns, both troopers entered the base undetected, only encountering a minor attack from the local wildlife. Once Fives set off the detonators as a form of distraction, Hardcase made the decision to try and pilot a nearby Umbaran starfighter. Although he had difficulty with the unfamiliar and advanced controls, he along with Fives successfully destroyed the Umbaran war machines and saved the rest of their platoon.

"Explain this, now!"
"Sir…we were decrypting the enemy craft when what appears to be an enemy booby trap went off."
"A booby trap?"
"Yes sir. The fighter went haywire, and had I not been able to take control of it and aim the missile at the doors...something worse might have happened."
―Krell demanding Hardcase's explanation for the Umbaran starfighter destroying hangar 9-4[src]

Disliking Krell's plan of marching directly towards the Capitol, He participated in a secret mission created by Fives, which was to use the Umbaran starfighters to destroy the orbiting Umbaran supply ship. Although the strategy was rejected by General Krell, Fives still stuck with it.

In the hangar, Hardcase decided to test run the Umbaran ships. As other clones have said, he wasn't a great flyer, and Hardcase ended up wreaking havoc and disintegrated the hangar door on accident. These actions combined caused an alarm to set off, causing Krell to contact the clones. after Fives unsuccessfully persuaded Krell to believe that there were no problems, the general confronted Fives and Hardcase personally. Hardcase then tells a story not too far from the truth and after Fives agreed to his semi-false story about the ships being booby traps, Krell restricted any usage of the ships whatsoever.

Despite the direct order the shut down the starfighters, Hardcase and Jesse accompanied Fives, stating that he agreed to the plan for the fun of it. Hardcase, Jesse, and Fives headed off to the overhead space battle and were amazed to discover the large-scale conflict.

Safely disguised by the Umbaran starfighters, The three of the troopers weren't identified as clones until inside the supply ship after Fives ran one battle droid over and another one looked at Hardcase. When they were identified and racing through the hangars of the supply ship, a tactical droid onboard activated a ray shield to prevent Fives and the troops from shooting at the main engines of the ship. The clones were forced to stop there and were assaulted by multiple B1 Battle Droids

While under attack, Hardcase noticed that his shield generators were losing energy and decided to destroy the core of the ship on foot, telling Fives and Jesse to leave him. With one of the missile launchers from his starfighter, Hardcase went through a small entrance around the ray shield wall and launched it towards the ship engines, crippling the main reactor and destroying the supply ship, killing himself in the process. Though he sacrificed his life, which allowed Jesse and Fives to escape safely and successfully limit Umbaran supplies.

In The Deserter, Hardcase was portrayed as slightly more level-headed than in the Umbara arc, where he becomes more trigger-happy and doesn't follow orders as to better explain his personality more than his previous appearance. 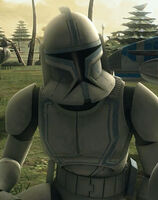 Hardcase in Phase I armor

Hardcase is grabbed by a Vixus during the Battle of Umbara 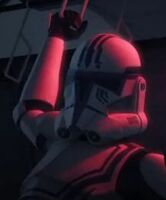 Hardcase on a Gunship over Umbara

Hardcase examines Captain Rex after he had been shot. 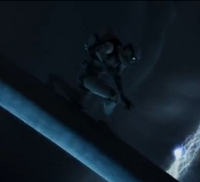 Hardcase sneaking into the Umbara fortress
Add a photo to this gallery
Retrieved from "https://clonewars.fandom.com/wiki/Hardcase?oldid=74470"
Community content is available under CC-BY-SA unless otherwise noted.