The Eta-2 Actis-class light interceptor, also known as the Jedi interceptor, was a starfighter used by the Jedi Order in the latter half of the Clone Wars, serving as the successor of the Delta-7B Aethersprite-class Starfighter. It saw usage during the Battle of Cato Neimodia where Anakin Skywalker and Ahsoka Tano piloted their respective starfighters to combat the separatist fighters on Cato Neimoidia, where Anakin's Starfighter came under attack by Buzz Droids and was destroyed.

The Eta-2 Actis Light Interceptor featured two forward cannons which fired powerful laser bolts, as well as two side Ion cannons which fired plasma bolts to disable their targets. It had radiator wings which the pilot would open to give the ship increased manueverability. It had a maximum accelaration of 5,200G in space, and a maximum speed of 15,000 kilometers per hour. It also featured a socket where a astromech droid could fit to aid in targeting and starfighter functions.

Anakin Skywalker and Ahsoka Tano leading a fighter squadron in their Jedi Interceptors.

Ahsoka Tano on her Jedi starfighter preparing to rescue an unconscious Anakin Skywalker. 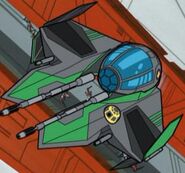 Saesee Tiin's Jedi interceptor.
Add a photo to this gallery
Retrieved from "https://clonewars.fandom.com/wiki/Jedi_Interceptor?oldid=65734"
Community content is available under CC-BY-SA unless otherwise noted.