Jesse, or CT-5597, was a clone trooper and later ARC Trooper of the 501st Legion who fought alongside Rex, Kix, and Hardcase. He was described as a proud soldier of the Republic, which led to the addition of the Galactic Republic emblem on his face and helmet. Prior to the Battle for Anaxes, Jesse was promoted to the rank of ARC trooper.

Jesse wore customized Phase I clone trooper armor with several light blue markings throughout. He wore the emblem of the Galactic Republic on top of his helmet and had it tattooed on the top of his head as well. His phase II armor bore similar markings but were recolored a darker shade of blue. Jesse's ARC Trooper Armor wore colours of the 501st and he had a Kama, Pauldron, DC-17 Hand Blaster but he used a DC-15S.

Rex, Kix, Hardcase, and Jesse patrolled Saleucami. While passing through a field, Captain Rex was shot in the chest by a commando droid, injuring him. Jesse, Kix, and Hardcase soon found a farm and took Rex there. After Rex was injured, he left Jesse in charge of the squad. Later, Jesse helped Obi-Wan Kenobi track down Grievous.

Jesse partook in the Battle of Umbara along with the rest of the 501st Legion. He survives the many assaults and fights alongside Rex, Fives, Kix, Hardcase, Tup, and Dogma and was led by Jedi Master Pong Prell. Jesse took part in many of the major engagements with the umbarans including an engagement with some allterain canons. Jesse helped Rex distract the cannons while Fives and Hardcase stole some local star fighters to help with there victory.

After awhile the clones got suspicious about pong krell and after he didn't let them use the star fighters to attack the enemy command ship. So the clone decided to take things into there own hands and Jesse acuponyed Fives and Hardcase on the mission. After an engagement with some droids on the ship they destroyed the ship but unfortunately hardcase lost his life sacrificing himself to destroy the ship. When Fives and Jesse got back Pong Krell decided to have them executed.

"You know, I'm only doing this is because I don't like him."
"There's reason enough."
―Jesse and Fives on their mission of flying the Umbaran starfighters[src]

As Jesse continued to complain about Pong Krell's suicide mission to directly attack the Umbaran Capital, he proposed that another idea be formed. After agreeing to Fives's plan of using the Umbaran starfighters to destroy the Umbaran supply ship, Jesse was eager to join in.

Although Fives's idea was denied by Krell, he, along with Hardcase and Fives, decided to continue with the plan. While mocking and criticizing Hardcase's poor piloting skills, Hardcase ended up causing severe damage in the hangar, causing Krell to order the lock-down of all Umbaran starfighters.

Still sticking with the plan, regardless of Krell's orders, Jesse agreed to join the two troopers on a mission to destroy the Umbaran supply ship. As the three flew off, they evaded detection and successfully infiltrated the supply ship. However, they were soon identified by a large group of B1 Battle Droids, which began to attack them. After an alert was sent throughout the supply ship, ray shields began to appear, blocking the entrance to the engine room.

Seeing that there was no safe means of escape, Hardcase departed from his starfighter, causing Jesse and Fives to try and stop him. Hardcase told them to leave him and he pushed a large missile into one of the reactors, causing the ship to explode along with him. Luckily, Jesse and Fives got out alive.

Later, back at the supply base on Umbara, Rex and Tup congratulated them for their success. However they were soon confronted by Appo, who informed them that Krell wished to see them immediately. After Krell learned it was Fives's own plan to destroy the supply ship, along with the disobeying of his orders, Jesse alongside Fives were scheduled to be court marshalled, and executed.

Originally, Jesse and Fives were to be killed. Though Rex attempted to convince Krell it was his fault, Krell ordered a line of troopers, including Kix and Tup to execute them, under the orders of Dogma. Before the firing squad pulled the triggers, Fives said Krell was using Dogma and Rex and that he had betrayed them. The squad fired, but intentionally missed. He and Fives participated in the arrest of Krell.

Once Tup had stunned Krell, Jesse and the rest of the troopers took him back to the Umbaran Airbase where they held him in the brig below. Once there, Rex questioned Krell why he would intentionally kill his own troops, to which Krell responded he saw the clones as nothing but expandable pawns. He also revealed he had foreseen both the Jedi Order and Republic being destroyed in the war, and a more powerful leadership would take its place. Finally the reason he had used such reckless strategies in battle was that he intended to sabotage the Republic's invasion on Umbara to become Count Dooku's new apprentice. The next part of his plan would take place when the remnants of the Umbaran Militia would retake the airbase, freeing Krell.

Back on the main level of the airbase, clone sergeant Appo reported that Obi-Wan Kenobi's battalion had taken the capital city, but the remaining Umbarans were moving towards the airbase. Jesse, Rex, Fives, and Tup all realized that if Krell was freed, he would give the Separatists all the crucial Republic information. Left with no choice, they all agreed Krell was too dangerous to be kept alive, and had to be executed.

Returning to Krell's cell, Rex prepared his blaster and ordered Krell to get on his knees facing away. But Krell taunted Rex, telling him he did not have the strength to kill him. But, using Fives's pistol, Dogma shot Krell through the back, killing him instantly.

Shortly after, Republic reinforcements arrived at the airbase, bringing word that Obi-Wan's forces had routed all Umbaran holdouts and secured all sectors. Umbara was under Republic control.

Later in the war, Jesse was promoted to the position of ARC Trooper. He was a participant of the Battle for Anaxes when Jedi Generals Mace Windu and Anakin Skywalker ordered Captain Rex and Commander Cody to form a small squad of trooper to go behind enemy lines and infiltrated the Seperatists Cyber Center. Rex and Cody recruited him and Kix, in addition to an experimental unit: Clone Force 99.

During their approach to the Cyber Center their Gunship was shot down and they were subsequently attacked by a legion of droids. The "Bad Batch" took them head on. After they targeted the Cyber Center, they took them head on and then extracted data of the algorithm being traced from Skako Minor and ARC Trooper Echo, who was reported dead at The Citadel. They then left the center and returned to Republic territory. 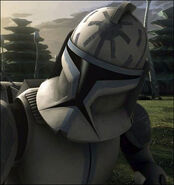 Jesse in Phase I armor 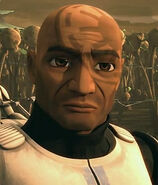 Jesse with his helmet off.

Jesse with Tup and Dogma on Umbara 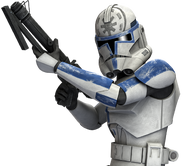 Add a photo to this gallery
Retrieved from "https://clonewars.fandom.com/wiki/Jesse?oldid=74899"
Community content is available under CC-BY-SA unless otherwise noted.