"Mundi: "65, Skywalker"
Skywalker: "Um...sorry?"
Mundi: "My total, 65. So what do I win?"
Skywalker: "[pause] My everlasting respect, Master Mundi."
Mundi: "Oh."
Kenobi: "That is a gift Anakin rarely bestows, I assure you!"
―Ki-Adi-Mundi, Anakin Skywalker, and Obi-Wan Kenobi during the Second Battle of Geonosis[src]

Ki-Adi-Mundi was a Cerean Jedi Master and was a member of the Jedi Council a decade before the clone wars, replacing Micah Giiett. He fought several battles with the Republic, being one of the few Jedi to survive the Battle of Geonosis and the Battle of Hypori. Mundi joined several other Jedi during the Second Battle of Geonosis, which came to be his most impressive victory. Unlike most Jedi of that era Master Mundi was married to several women in fact and had several children. This is due to his Cerean heritage, as his species' birth rate is so low that all Cereans must reproduce in order to insure their race's survival.

Ki-Adi-Mundi was one of the 212 Jedi Knights sent to rescue Obi-Wan Kenobi, Anakin Skywalker and senator Padmé Amidala, who were being held captive on Geonosis by the Seperatists, led by Count Dooku. Mundi, alongside the other Jedi who had travelled to the planet in order to rescue Kenobi, Skywalker, and Amidala, engaged the Separatists in what was to become a very bloody battle. However, after many minutes of brawling with the battle droid armies, the majority of Jedi were killed and the Separatists gained the upperhand, leaving only a handful of Jedi, including Ki-Adi-Mundi. Fortunately, before battle could resume, several Low-Altitude Assault Transports led by Jedi Master Yoda arrived and rounded up the surviving Jedi, taking them to safety.

Ki-Adi-Mundi led a task force to the planet of Hypori, where a large droid factory was established. However, with the aid of General Grievous, the droid army easily gained the upper hand, forcing Mundi and his fellow Jedi to retreat to the wreckage of their destroyed Republic frigates. It was here that Ki-Adi Mundi fought in a gruelling duel against Grievous alongside his fellow Jedi Knights, Aayla Secura, K'Kruhk, Shaak Ti and padawans Tarr Seirr and Sha'a Gi. With defeat in the cards once again, Mundi and the surviving Jedi were rescued by clone Captain Fordo and his ARC Trooper squadron.

After some resistance from the native Geonosians and Separatist re-occupation, Republic Forces were forced to return to Geonosis and retake the planet. Alongside Obi-Wan Kenobi, Anakin Skywalker and Skywalker's padawan, Ahsoka Tano, Ki-Adi Mundi was deployed with his troops to land at an area called "Point Rain". However, the Cerean Jedi's gunship was shot down, and he, his men, and his tanks had to move on foot. Mundi decided to take a shortcut through a cave, and after a small skirmish, his forces broke through, which allowed them to join the other clone troopers at Point Rain.

When Satine Kryze sent a distress signal to the Jedi Order alerting them of the crisis of Mandalore, Mundi and Yoda informed Kenobi that she had contacted them for help. Mundi argued that the neutrality of Mandalore and the lack of involvement of the Separatists prevented them from intervening.

To Catch a Jedi

After Ahsoka Tano escaped Republic Judiciary Central Detention Center and headed to the Underworld of Coruscant, the Council held a discussion during which Mundi questioned Skywalker about the possibility of convincing Ahsoka to be apprehended.

Ki-Adi-Mundi was present during the trial of Ahsoka Tano where he chose, along with the majority of the Council, to expel Tano from the Jedi Order so that she could receive a trial at a Republic military court. After Tano was proven innocent, Mundi along with other Jedi Council members personally invited Tano to return to the Order, but Tano instead chose to leave, as she felt she could not trust the Council anymore.

He was present at the Jedi High Council meeting when Yoda claimed that he heard the disembodied voice of Qui-Gon Jinn. Mundi argued that it was possibly a deception from the Sith with the aim of destroying the Jedi Order. 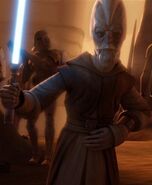 Mundi with Anakin Skywalker and Obi-Wan Kenobi talking with Luminara Unduli on a Hologram.

Ki-Adi-Mundi during the Clone Wars

Mundi, Tiin and Yoda on the Jedi High Council

Mundi during the Battle of Hypori

Add a photo to this gallery
Retrieved from "https://clonewars.fandom.com/wiki/Ki-Adi-Mundi?oldid=84439"
Community content is available under CC-BY-SA unless otherwise noted.