Prince Lee-Char was a male Mon Calamari who lived on Dac, during the Clone Wars. He turned the king of Dac shortly after the Battle of Mon Cala.

Lee Char was more or less the leader of the Battle of Mon Cala supporting the Galactic Republic when the Quarrens launched a civil war on Mon Cala with Riff Tamson and his droids form the Confederacy of Independent Systems in repelling action for having another Mon Cala king, as they would highly prefer a Quarren king after the assination of King Yos Kolina, rising the tensions of the two species. Nossor Ri was a good friend of the latley deacesed king, yet he and the rest of the Quarrens continued to revolt against the Mon Calamaris, yet in the end Nossor Ri saw his mistakes comprising with Count Dooku and, betraying Riff Tamson. At the end of the Battle of Dac, Lee-Char killed the Karkarodon Tamson, and became King Lee-Char of Mon Calamari, with the Quarrens supporting him. Appearance/Appearence: He's a male Mon Calamari with yellow and organge skinned. 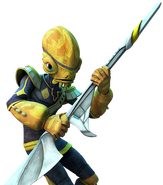 Add a photo to this gallery
Retrieved from "https://clonewars.fandom.com/wiki/Lee-Char?oldid=83098"
Community content is available under CC-BY-SA unless otherwise noted.