The Clone Wars
Register
Don't have an account?
Sign In
Advertisement
in: Articles needing major cleanup, Characters, Males,
and 6 more

Mace Windu was a Jedi Master during the Clone Wars. Windu held the second chair position on the Jedi High Council and was considered to rival Master Yoda in both power and skill. Windu held the title of Master of the Order but passed it on to Yoda following the First Battle of Geonosis. Windu created the lightsaber combat Form VII: Vaapad, which focused on dark emotions. Windu also took charge of the 91st Reconnaissance Corps and the Lightning Squadron, which he lead during the Clone Wars in battlegrounds such as Ryloth, Malastare, and Anaxes.

After answering a plea from the Republic Senate, the Council sent Anakin Skywalker and his Padawan Ahsoka Tano to breach the Separatist blockade around the planet of Ryloth to make way for a ground assault aimed at freeing the Twi'lek people from Separatist occupation.

When the initial engagement with the blockade proved unsuccessful, resulting in huge losses on the side of the Republic, Master Windu warned Skywalker that he was allocated only a single planetary rotation of Ryloth to breach the blockade, as the invasion needed to move forward with or without having broken the Separatist's defenses. Skywalker and Tano utilized less than conventional tactics to defeat the Separatist warships, making way for the forces led by Masters Windu and Kenobi to begin their ground assault of the oppressed planet.

Kenobi and Ghost Company set off to land on Nabat, which the Jedi planned on using as a landing point. However, proton cannons from below attacked their Acclamator-class assault ships above, and after Clone Commander Ponds reported that the guns were breaking through their shields, Windu ordered Kenobi to destroy the guns and allow the transports to land. Kenobi was later successful, and after the transports landed, the Jedi and the clone troopers set off for the capital city of Lessu to retake it and free the planet.

Windu went to liberate the capital of Ryloth along with members of Lightning Squadron. To accomplish this, Windu was forced to rely on his considerable negotiation skills, as he knew he would require the aid of Cham Syndulla, leader of the Twi'lek Freedom Fighters. However, Syndulla did not trust Ryloth's Senator Orn Free Taa, while Taa himself feared that Syndulla would seize power. After learning that the Separatists had begun to bomb innocent local villages, Syndulla at least agreed to talk with Senator Taa.

Windu acted as moderator during the talks and ultimately was able to form an alliance between the two out of their mutual wish to see their people free. Syndulla then added his forces to Windu's, and the pair managed to retake Lessu from Tambor. In addition, Windu managed to capture the Separatist leader, Wat Tambor, before he could escape.

Windu and Anakin Skywalker visited the Endurance later in the war, where they mentored a group of young clone cadets. Unbeknownst to Windu, a young Boba Fett had stolen in amongst the cadets and was in the process of assassinating Windu in revenge for his father, Jango Fett. With the help of fellow bounty hunters Aurra Sing and Bossk, Fett learned the coordinates of Windu's quarters and planted a bomb in the door frame, though Windu is called away to business just before stepping inside and a clone tasked with stowing the Jedi's datapad is caught in the blast instead. Examining the room's charred remains with Skywalker, Windu determined that he was the direct target of the attack and ordered a thorough search of the ship. That search led a clone trooper into contact with Fett in the Endurance's reactor core, causing Fett to panic and destroy the core completely, setting off a gigantic explosion and dooming the ship and its crew. Windu and Skywalker escaped the crashing ship in their starfighters and watched the flaming hulk descend to Vanqor below.

During the salvage operation of the Endurance, Skywalker came across a Mandalorian helmet on the bridge, which Windu soon recognized as the helmet of the late Jango Fett. Though he warned Skywalker to drop it instantly, the helmet exploded, and Windu was barely able to pull Skywalker away in time. With the Endurance collapsing around them, the two Jedi were trapped under a large piece of the ship and, unbeknownst to them, were waiting targets for the approaching Fett, Sing, and Bossk. After learning that Windu's astromech droid R8-B7 had been destroyed by Gundarks, Skywalker sent his droid R2-D2 to transmit a message to the Jedi Temple, calling in help.

R2-D2 was able to hold off the bounty hunters and pilot a starfighter well enough to evade Slave I and return to Coruscant, where he gained the assistance of Plo Koon and Ahsoka Tano. The two Jedi returned to Vanqor with R2-D2 in tow and rescued Windu and Skywalker moments before the entire Endurance collapsed in a flaming wreck. Windu was too wounded to continue searching for Fett and was forced to watch along the sidelines as Koon and Tano tracked him across the galaxy and brought him back Coruscant for justice. Windu confronted the boy briefly before he was marched off to prison, only to discover his hating of the Jedi was as strong as ever.

The peaceful world of Bardotta and its mystic ways are threatened by an ancient prophecy, and its top spiritual leaders have vanished. Queen Julia of Bardotta calls for help from her most trusted friend in the Senate, Jar Jar Binks. Recognizing the importance of Bardotta's spiritual balance, the Jedi Council sends Windu to accompany Binks and investigate.

The bloodthirsty Frangawl Cult abducts binks' beloved Queen Julia to fulfill a dark and ancient prophecy. Representative Binks and Windu must find the missing Queen before the cult can rise in power. It is later revealed that the cult leader is no one less than Mother Talzin of Dathomir. Windu leaps onto the ritual platform to confront Mother Talzin, who summons a flaming sword using her magic. As the Jedi and the Nightsister duel, Jar Jar uses one of the stone guardians' weapons to blast the cult members and frees the Queen from her bonds. As the cult leader attacks Jar Jar, the planets align, and a beam of energy blasts through a series of lenses. Julia pushes Jar Jar out of the way, and the cult leader's spirit is torn out of him. The Force sphere falls from its pedestal, shatters, and releases the Force energy, which unleashes its fury in a huge explosion. Windu gets to his feet to see Talzin screaming as she disappears.

Queen Julia thanks Binks and Windu for rescuing her and suggests that these events could begin a new era of understanding between the Bardottans and the Jedi.

"The Droids have overrun our main production facility and it is only a matter of time before the Separatists have taken Anaxes, compromising our entire reserve fleet"
―Windu speaking with Skywalker during the Battle for Anaxes[src]

Later in the war, Windu led the 91st Reconnaissance Corps and Jedi General Anakin Skywalker and the 501st Legion to the planet Anaxes. The Separatists, led by Admiral Trench, had gained the upper hand after weeks of battle. Windu conferred with Skywalker at the Republic base after the Battle Droids had taken over their main production unit. CaptainRex of the 501st and the 212th'sCommanderCody arrived at the discussion, and the captain shared his theory on why Trench had been winning the battle. He believed that the enemy, based on their movement, had been using an algorithm he had created. Only two other troopers, ARC TroopersEcho and Fives, both dead, had known the algorithm. Windu and Skywalker immediately agreed, and Windu ordered them to take a small squad of troopers to infiltrate the Cyber Center.

"He's too dangerous to be left alive!"
"It's not the Jedi way. He must live!"
―Mace Windu and Anakin Skywalker with Palpatine at their mercy, as heard in a Force vision by Ahsoka Tano[src]

After learning that Palpatine was a Sith Lord, he set off with three other Jedi, Agen Kolar, Saesee Tiin, and Kit Fisto, to arrest him. Palpatine swiftly overpowered the Jedi, killing Kolar, Tiin, and Fisto, and dueled Windu in his office. Windu eventually disarmed the chancellor and had him at his mercy. Anakin then arrived at the office in spite of Windu's orders to remain in the Jedi Council chamber. Skywalker pleaded with Windu to spare Palpatine's life, but Windu argued that he was too dangerous to be left alive. Before he could strike the killing blow, however, Skywalker drew his own lightsaber and severed Windu's arm. Palpatine took advantage of this moment and unleashed his Force Lightning on Windu until the Jedi Master fell through the window to his death.

Windu was a very powerful Jedi, assumed to be second in Force ability only to Master Yoda. He created his lightsaber form, a variation of Form VII called Vaapad. It brought him dangerously close to the Dark Side, as Windu created the form as an avenue for his dark impulses. He was the only Jedi who did not turn to the Dark Side after mastering this form. 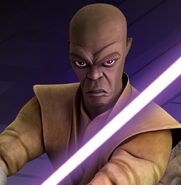