The Mandalorians were a fierce warrior culture known across the galaxy for their skill in combat and an epic proficiency in the application of violence.

The roots of the Mandalorian culture began on ancient Coruscant with a species known as the Taung. The Taung were a humanoid species believed to be native to Coruscant who were driven off the planet after a war with the planet's human settlers. After leaving Coruscant the Taung wandered across galaxy until the appearance of a great leader known as Mandalore, he would lead the Taung in a successful conquest of the planet now known as Mandalore. After capturing the planet they named it and their nation for Mandalore giving birth to the term "Mandalorian". Eventually the Taung began to disappear from the galaxy for reasons which were rather unclear and so the name "Mandalorian" soon became synonymous with the hegemony of species conquered and adopted by the Taung in their warrior crusades.

From the earliest days of the Republic and the Jedi Order the Mandalorians had emerged as a dangerous competitive force striking fear in the hearts of Republic citizens particularly in the years surrounding the Mandalorian Wars. During this conflict the Mandalorians nearly brought the Republic to its knees and had it not been for the actions of several rebellious Jedi Knights lead by a Jedi known only as Revan it was quite likely that the galaxy would have fallen to the Mandalorian crusaders. Sadly after the war Revan and the Jedi under his command would return to Republic space much like the Mandalorians they had previously defeated adopting the the mantle of "Sith". For several centuries after this period the Mandalorian culture would continue to clash and ally itself with forces devoted to fighting the Jedi.

By the time of the Clone Wars Era, the Mandalorians had renounced the violence and desire for conquest which haunted most of their history. Under the leadership of Jester Mereel who authored the Supercommando Codex the people of Mandalore became friends of the Republic. However not all Mandalorians stood with Jaster and his attempt to civilize their savage society and so a splinter faction known as the Death Watch was formed. Thus leading to a series of battles called the Mandalorian Civil Wars. Even though they were defeated by Jaster's adopted son Jango Fett, The Death Watch would reemerge years later and make several attempts to assassinate the Duchess of Mandalore Satine Kryze. 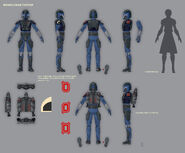