Neyo, designated CC-8826, was a clone marshal commander who served as the leader of the 91st Reconnaissance Corps of the Grand Army of the Republic during the Clone Wars. At some point during the war, he was known to be the master of WAC-47, a pit droid who was later assigned to D-Squad, a group of droids outfitted to go on a mission to steal an encryption module from a Separatist dreadnought.

Neyo had a specialized helmet similar to that of Commander Wolffe, and sported a sash on his armor, and a small, grey, shoulder pauldron over his right shoulder as well. 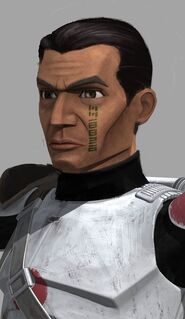 Neyo without his helmet. 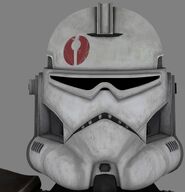 Neyo's helmet
Add a photo to this gallery
Retrieved from "https://clonewars.fandom.com/wiki/Neyo?oldid=83986"
Community content is available under CC-BY-SA unless otherwise noted.