Start a Wiki
watch 01:48
The Loop (TV)
Do you like this video?
Phase II Clone Trooper Armor was the commonly-used armor worn by clone troopers, after the start of the second half of the Clone Wars. The helmet design and body armor of Phase II armor differed greatly from those of Phase I armor. It was also highly improved, compared to Phase I Clone Trooper Armor, as it had installed controls and communications, as well as an advanced vision within the visor and ammo packs closer together for easier use.

In some other cases, some clone troopers have created hybrids of their Phase II and I Armors. Rex was one such clone who did this.

Some troopers, such as Clone Naval Officers or medical officers, did not wear armor. Instead, when Phase II was introduced, they wore new uniforms, often with new symbols and insignias. They were also issued officer caps, which had code cylinders for naval officers. 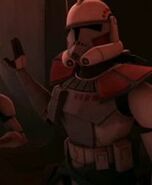