Rako Hardeen's arsenal included a sniper rifle, blaster pistol, and smoke grenades. He also owned a BARC Speeder. The helmet Obi-Wan Kenobi selected from Pablo's pawnshop while disguised as Hardeen could protect the wearer from dioxis.

"Rako Hardeen, your reputation precedes you."
―Moralo Eval to Hardeen[src]

At some point during the Clone Wars, Rako Hardeen was employed to kill High Jedi General Obi-Wan Kenobi by Kenobi himself in a plot to infiltrate and sabotage Dooku's plot to kidnap Palpatine. While Kenobi, his former apprentice, Anakin Skywalker and Ahsoka Tano were walking back to their shuttle to attend an emergency Jedi Council meeting about the Separatist plot, Hardeen attacked the three Jedi with a sniper rifle. Obi-Wan quickly elaborated his plan to Tano and Skywalker, going directly after the bounty hunter. When Anakin lost him, Kenobi emerged from hiding and intentionally walked into plain view, swiftly being shot by Hardeen's sniper and fell off the building. Skywalker, now enraged, followed Hardeen, but the bounty hunter escaped him on his BARC Speeder.

He then went to the Trueping's bar so that he could tell everyone about his success. One of the servant droids told him that his payment is waiting for him in the other room. He walked into the dark, and saw Obi-Wan Kenobi disguised as him. Kenobi told him to give him his clothes, but he started to turn back until Mace Windu stopped him, who was also there. Kenobi soon dressed as Rako, while Windu recorded bounty hunter's voice using a vocal emulatorso that Obi-Wan could use it. After Kenobi was ready, Windu put Rako to sleep.

Rako Hardeen aiming for the Jedi 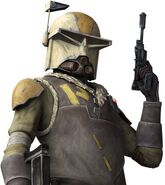 Add a photo to this gallery
Retrieved from "https://clonewars.fandom.com/wiki/Rako_Hardeen?oldid=85031"
Community content is available under CC-BY-SA unless otherwise noted.