"Showdown on Dathomir" is an unproduced episode of Star Wars: The Clone Wars. It was adapted into Star Wars: Darth Maul: Son of Dathomir #4, the fourth release of Legacy. It was released as such on August 20, 2014.

Count Dooku is possessed by the spirit of Mother Talzin! Darth Maul's Shadow Collective is shattered! The Separatists attack! And Darth Sidious himself enters the fight! 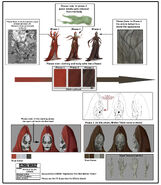 Add a photo to this gallery
Retrieved from "https://clonewars.fandom.com/wiki/Showdown_on_Dathomir?oldid=81210"
Community content is available under CC-BY-SA unless otherwise noted.