Jedi Order
Sifo-Dyas was a Human male Jedi Master of the Galactic Republic who served on the Jedi Council in the years before the Clone Wars.

Sifo-Dyas was known to have a prodigious talent for precognition through the force. With this gift, Dyas had a vision of the impending destruction facing the Republic. Master Dyas was so moved by this vision, he realized the Jedi Order did not have the power or means to protect the Republic. Instead he sought out the reclusive Kaminoans. These talented cloners were tasked by Sifo-Dyas to create a massive clone army for the Republic. However, before the project could be completed, Master Dyas went missing and never seen or heard from again. It was later revealed that Sifo-Dyas was attacked and killed by his friend Count Dooku who at the time was still a well respected Jedi Master who under the orders of his new Sith master took control of the project. Later, Jango Fett was chosen as the template for this Grand Army of the Republic.

Sifo-Dyas appears in hologram form in the Republic file. 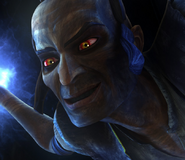 An illusion of Sifo-Dyas on Moraband
Add a photo to this gallery
Retrieved from "https://clonewars.fandom.com/wiki/Sifo-Dyas?oldid=83362"
Community content is available under CC-BY-SA unless otherwise noted.