Stone, designated CC-5869, was a clone commander of the Coruscant Guard during the Clone Wars.

He worked alongside Representative Jar Jar Binks and Senator Kharrus during a political mission to give a ransom to the Weequay Pirate leader Hondo Ohnaka in return for the captured Count Dooku, Anakin Skywalker, and Obi-Wan Kenobi. Stone was also seen fighting the Weequay Pirates on Florrum.

Stone could easily be identified by the several maroon markings throughout his clone trooper armor. During battle he could be seen equipped with dual DC-17 Hand Blasters. 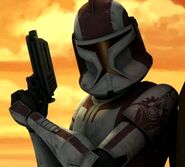 Stone speaking with Representative Binks.
Add a photo to this gallery
Retrieved from "https://clonewars.fandom.com/wiki/Stone?oldid=83911"
Community content is available under CC-BY-SA unless otherwise noted.