Sugi was a female Zabrak bounty hunter who worked with three other bounty hunters aboard her personal starship, the Halo.

As an Iridonian native Sugi possessed a strong personal code of ethics and combat skills both of which she employed during her mercenary career. After being hired by a village of Felucian farmers she, alongside her shipmates, padawan Ahsoka Tano and Jedi Knights Obi-Wan Kenobi and Anakin Skywalker fought off Hondo Ohnaka and his band of pirates.

She also appeared on the Halo when she dropped Tarrful and the Wookiee warriors off on Trandosha ship to help kill the Trandoshan Sport Hunters. 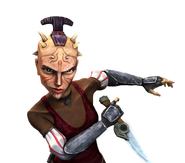 Sugi and her band of mercenaries on Felucia.

Sugi and Embo take on the leaders of the Shadow Collective: Darth Maul and Savage Opress.
Add a photo to this gallery
Retrieved from "https://clonewars.fandom.com/wiki/Sugi?oldid=76374"
Community content is available under CC-BY-SA unless otherwise noted.