Sundari was known to be an area of peace after the New Mandalorian government was established, with numerous advances in both industry and finances. The city's peace was not to last, however, as a bombing, orchestrated by the Mandalorian splinter group, Death Watch, was carried out in the Peace Park in the heart of the city.

The city later would come under siege when the entire Death Watch cult invaded in an attempt to resurrect their warrior heritage.

The Sundari shipping docks were located just outside the Mandalorian capital city Sundari and was where cargo ships docked on Mandalore to load and unload cargo containers. 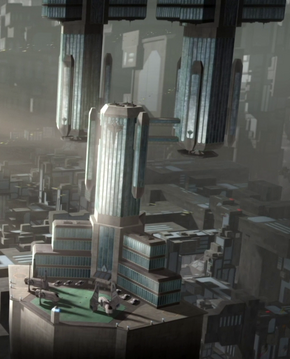 The hospital was a tall building with two adjacent buildings connected to the main tower. The facility had a landing area for transports in front of the main entrance. It was newly built when Padmé Amidala visited the world during the Clone Wars.

While showing Padmé the new hospital, Duchess Satine Kryze had discovered the hospital received many children who had been poisoned by slabin-spiked Ardees Beverage Company tea, though the source of the problem was unknown at the time. Doctor Zak Zaz worked as a physician in the hospital. 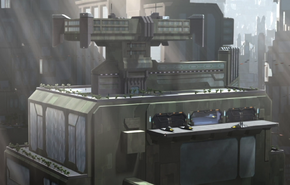 The school was situated at the top of a skyscraper in the city on the planet Mandalore. It contained its own cantina and an elaborate chemical laboratory. The same building had a hangar for supply vessels to drop off supplies to the school. It received sufficient funding from the government.

The Royal Academy of Government consisted of several stories and was used to groom children to become future Mandalore government officials. During the Clone Wars, the cadets Koekie (Duchess Satine's own nephew), Amis, Lagos, and Soniee studied at the Academy, and they along with Jedi Padawan Ahsoka Tano played a key role in exposing a black market conspiracy on Mandalore. Students at the academy were well versed in both Aurebesh and Mandalorian. 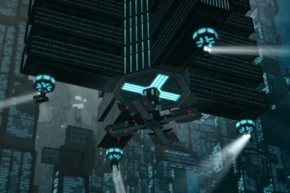 The royal prison was a prison in Sundari, Mandalore. It was suspended from the ceiling of the city's bio-dome. Duchess Satine Kryze was imprisoned here when she attempted to expose Prime Minister Almec's black market conspiracy,and again during Death Watch's coup.

The Mandalore Banking Center was the primary banking center of Sundari,the capital city of the planet Mandalore. It was attacked by the Shadow Collective during their takeover of Mandalore

Retrieved from "https://clonewars.fandom.com/wiki/Sundari?oldid=73510"
Community content is available under CC-BY-SA unless otherwise noted.