This page is about the episode titled "The Bad Batch". You may be looking for the arc, of which this episode is a part, by the same name.

"Embrace others for their differences, for that makes you whole."
―Jedi Fortune Cookie[src]

"The Bad Batch" is the first episode of the seventh season of Star Wars: The Clone Wars. It is the hundred and twenty-second episode of the series overall. It was released on February 21, 2020 on Disney+. It was previously screened on April 17, 2015 at Celebration Anaheim, and released as a story reel in tandem with the rest of the Bad Batch arc on April 29, 2015 on StarWars.com.

The clones look to uncover the source of the Separatists' strategies...and bring in an elite squad called the Bad Batch.

A fierce battle rages on the planet Anaxes and the Separatists have gained the advantage. At the Republic base, Jedi General Mace Windu confers with Anakin Skywalker that the Separatists have overrun their main facility. The mounting losses indicate that the Republic is fighting a losing battle. Commander Cody and Captain Rex arrive at the command center, where Rex explains his theory as to why the Confederate commander of the battle, Admiral Trench, is able to counter the Republic's advances so effectively. Trench possesses an algorithm for the Republic's battlefield strategies, which was developed by Rex in the interest of reinforcing their weaknesses. However, he confided the algorithm with only two of his men, Fives and Echo, the latter of whom was presumed dead at the Citadel.

Windu then tasks Cody and Rex to take a squad to infiltrate the Separatist cyber station on Anaxes and confirm their suspicions. Rex recruits ARC Trooper Jesse and medic Kix while Cody enlists the help of an experimental Clone Commando squad, Clone Force 99. Their genetic mutations and brash attitudes are a source of mistrust and conflict between themselves and the regular clones, but Cody convinces them to work together on this mission. As they enter approach the Separatist cyber station, their gunship is shot down by enemy fire, severely injuring Cody in the crash.

Their crash site is soon discovered by a large force of Droids, but Hunter and the Bad Batch insist on taking them head-on. Rex and Jesse watch in astonishment as the Bad Batch single-handedly dispatch the entire force with their unconventional tactics. Having cleared a path, they lead the group on towards the cyber station. Kix soon evacuates Cody from the field, leaving Rex in command of the mission, about which the Bad Batch have doubts. Hunter nonetheless pulls them together and agrees to let Rex lead them.

Just short of the cyber station, the squad comes across a Separatist outpost, and Rex decides to follow the Bad Batch's style by taking it head-on. The clones swiftly overrun the post, but their tactics have captured Trench's attention. The admiral calculates that the Republic is mounting an attack on the cyber station and sends reinforcements there to cut off the bold advance.

Rex waits until the Separatists reach the outpost to attack the cyber station. He and Jesse create a diversion in front to allow Hunter, Tech and Wrecker to enter in the rear while Crosshair covers them from afar. The clones battle their way inside and Tech gets to work on the central computer while the rest hold off the droids outside. Realizing how outnumbered they are, Hunter has Crosshair steal a Separatist speeder for their getaway.

Rex joins Tech at the central computer to confirm that the Separatists are indeed using the algorithm in the battle, but rather than possessing the program itself, they receive strategy updates from another planet: Skako Minor. Tech discovers that the signal originates from a live being and has it to identify itself. The signal responds with a clone designation: "CT-1409." Hunter, Wrecker and Jesse become overpowered outside and retreat through the station with Rex and Tech to the rear entrance, where Crosshair arrives with the speeder and transports them away.

When the Battle Droids report in after recapturing the cyber station, Trench is dismayed to learn that the clones discovered the source of the signal. Meanwhile, as the squad returns to the base, Rex is left in disbelief at their findings. Tech questions him about the signal they heard and Rex tells him that CT-1409 was Echo's number, leading him to conclude that Trench is accessing the algorithm through Echo himself. 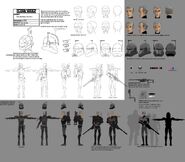 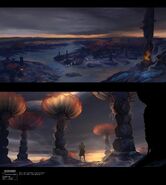 "The best defense is a strong offense."
―Original moral[src]

The finished version of this episode on Disney+ features some minor differences with the original story reel release, including Rex's alternate explanation of his algorithm and a brief scene with Cody and Rex in the barracks.

Retrieved from "https://clonewars.fandom.com/wiki/The_Bad_Batch?oldid=84806"
Community content is available under CC-BY-SA unless otherwise noted.