Tup, officially known as CT-5385, was a clone trooper who served under Captain Rex in the 501st Legion during the Clone Wars. He was one of the newer, less experienced members of his unit, but as time progressed he formed close bonds with troopers who served alongside him. He followed orders as he was told, but knew when to deviate from them when they put too much danger upon him or his allies. He was quick thinking, but his nature was wasted when he died from a microchip disorder within his brain.

Tup had the same physical appearance as any other clone trooper. However, he had a tattoo of a teardrop under his right eye and wore his hair up in a bun, both of which set him apart from other troopers. He also personalized his Phase II armor with unique tear and stripes patterns. When needed, he equipped night vision goggles onto his helmet to help him see in the dark.

He carried a DC-15S in battle, and also made use of its stun firing mode. He also had knowledge of how to operate a mortar, which he used on Umbara.

In the second half of the war, the planet Umbara seceded from the Republic and joined the Separatist alliance. The Republic proceeded to launch a full-scale invasion to retake the planet, sending in the attack forces in LAAT Gunships. The main assault was on the capital, which would be attacked directly by the 212th Attack Battalion. The 501st was to proceed to the north.

Tup was among the passengers on board Anakin Skywalker's ship. They encountered heavy artillery fire from the Umbaran militia below, but were able to land with the assistance of AT-RTs. As the forces stormed the defenses, Tup noted the darkness of the world, and had difficulty finding his targets. The Umbarans were soon defeated and the 501st troopers moved northwards to a ridge for temporary recovery. The troopers rested, waiting for orders to move on. However, the Umbaran forces caught them off guard when they released a millicreep into the ridge from the rear. The droid quickly began to electrocute targets, and the noise woke the troopers from their sleep.

Tup and the others grabbed their blasters and began firing at it. However, the droid dodged their shots as it ran through the men. The rest of the militia began firing onto the troopers' position, and Tup redirected his fire towards them. He ran off the ridge with the rest of the 501st as an air strike was called onto their location. They took cover in the forest below as the explosions destroyed the hill and their ambushers.

Shortly after skirmish, General Skywalker was ordered back to Coruscant, with Jedi General Pong Krell filling his position. Krell's leadership strategy was by the book, the troopers marched for twelve hours through the terrain without rest. When they reached the main road, Krell abandoned Skywalker's original plan, and replaced it with a reckless full frontal attack. The infantry and cavalry all marched straight up the main road. Tup questioned General Krell's leadership during walk, and many other troopers agreed. However, Captain Rex stopped the discussion and told the troopers to follow their orders.

Suddenly, mines exploded killing two troopers. Before they could move any further, they were attack from all sides. Umbaran infantry ran forward for close-quarters combat. Tup was strangled by a militiaman, but knocked him to the ground and shot him. Stuck in the open, the clones suffered heavy casualties, and most of their AT-RT support vehicles were destroyed. Captain Rex figured that they would not last any longer under fire and ordered his men to retreat. As the troopers pulled back, the militia followed, allowing the clones to finally get a focus and target point. Krell sent in additional forces to aid Rex, and the combined platoons defeated the militiamen, who retreated back down the road. However, the clone forces were again attacked shortly after.

Tup continuted to fight in the Battle of Umbara with the 501st Legion and doubted Krell's tactics putting them endangered.

One of his closer clone brothers, Dogma, had the opposite idea. Tup would sometimes see it his way, especially when Fives, Hardcase and Jesse decided to attack the Separatist Supply ship in orbit. When he and Dogma attempted to inform Krell of the insubordination, Rex discouraged them. Tup later went to welcome Fives and Jesse when they arrived back.

Tup was one the clones assigned to execute them for disobeying orders. After getting word that the Umbarans had stolen clone armor and weapons, Krell ordered the battalion to attack them at once. Tup took part in the attack and, on the way, saved Dogma from waking up a Vixus. During the skirmish Tup manned a motar and aided Kix in saving a wounded clone. Rex later found out that they were shooting at other clones from Ghost Company.

Tup, along the rest of the 501st, was stunned. The 501st and some clones from Ghost company rebelled against Krell for treason. Tup also, in a way, saved the lives of the 501st troops. He saw a Vixus and got an idea. Tup told Rex to lead General Krell, now a tratior, near the Vixus. Tup deliberately disracted Krell from the rest of the clones and risked his own life to capture him. When Krell escaped the Vixus' grip, tup proceded to stun him. Later, after Jedi General Obi-Wan Kenobi captured the capital city, it was revealed that the remaining Umbarans were retreating to the airbase. Having knowledge of Krell's treachery, Tup stated that as long as Krell was alive, he was a danger to them all. Rex, seeing Tup's reasoning, decided to execute Krell. However Krell mind tricked Rex into not killing him, so Dogma took Fives blaster pistol and shot Krell.

Later in the war, Tup took part in the Battle of Ringo Vinda aboard a space station that encircled the planet. During the lengthy stalemate, Tup went missing for five days. He reappeared again, seemingly unharmed, as the Republic began to gain the upper hand with the support of twin sister Jedi Masters Tiplar and Tiplee.

Once they finally neared the Separatist command post, their troops had grown thin. Fives and Tup were assigned to support General Tiplar's part of the strike. However, Tup began to display an unusual and deadly interest in Tiplar. Though Fives was able to snap him out of it temporarily, Tup entered a delusional state as the Republic neared victory, which led him to shoot Tiplar in the head at point blank. Fives quickly apprehended him and escorted him away as the Republic advance collapsed as a result of Tiplar's death.

At a safe position, Rex demanded Tup to explain why he had executed one of his Jedi Generals. Tup only responded with a repeated mantra that good soldiers follow orders. When Tiplee went over to observe him, Tup attempted to attack her as well. The Jedi threw him back with the Force, but Anakin stopped her, insisting that he be taken back to med bay for examination. Once Tup became coherent again, he refused to believe that he had murdered one of his Jedi Generals and had to be sedated. Kix, who had performed several uneventful scans on Tup, stated that the best medical care Tup could receive was on Kamino.

As Tup was transported back to his home planet, his medical shuttle was ambushed by a Droid Gunship and several Rocket Droids who abducted him to be brought to Count Dooku in order to cover up the true cause of the trooper's actions. Upon learning of the attack, Anakin, Rex and Fives launched their own mission to retrieve him. After they boarded the shuttle carrying him to Serenno and recovered him, Fives realized that his condition had worsened. Rex and Fives quickly accompanied him back to Kamino in search of answers.

Fives, determined to rescue his friend, performed a scan of his brain and, with the help of a medical droid, AZ-3, removed the "tumor" in his brain—a malfunctioning inhibitor chip. After the surgery, he seemed happy, saying he was free from "the mission that never ends...the mission in our nightmares...", before passing away. 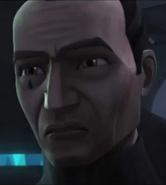 Tup without his helmet

Tup and Kix fighting on Umbara.

Tup about to kill a Jedi.
Add a photo to this gallery
Retrieved from "https://clonewars.fandom.com/wiki/Tup?oldid=74153"
Community content is available under CC-BY-SA unless otherwise noted.