The Variable Geometry Self-Propelled Battle Droid, Mark I, better known as the Vulture Droid, was a droid starfighter unit commonly used by the Trade Federation and later the Confederacy of Independent Systems, which were capable of operating on land using their wing mounts as legs. The Vulture Droid was a lightly armored with a relatively low number of weaoons adding to the unit's speed and maneuverability. 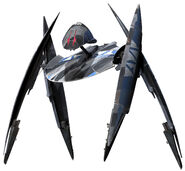 a Vulture Droid in walk mode.
Add a photo to this gallery
Retrieved from "https://clonewars.fandom.com/wiki/Vulture_Droid?oldid=73535"
Community content is available under CC-BY-SA unless otherwise noted.