Wolfpack was one of the larger squads of clone troopers who fought during the Clone Wars. Under the command of Jedi General Plo Koon and Commander Wolffe. Wolfpack fought by his side in the Battle of Khorm, the First Battle of Felucia and the Battle of Abregado. Most of the original members of Wolfpack were killed during the attack of the Malevolence.

Before the the Malevolence destroyed most of the members of Wolfpack, members could be easily distinguished by the maroon markings on their standard clone trooper armor. After the destruction of the Malevolence, clone troopers belonging to Wolfpack bore distinct dark blue markings on their armor, and the symbol was redesigned to honor their fallen comrades. Prior to the battle of Felucia, Wolffe changed the color scheme again to grey-black. Some members of Wolfpack were ARF Troopers.

"We're picking up a large energy reading from the target, sir."
"Open fire!"
"We're not in range yet, sir."
―Wolffe and Plo Koon as the Malevolence attacks their fleet[src]

As the word came to the Jedi of a new threat, they decided to send Jedi General Plo Koon and the Wolfpack to hunt down the new mystery weapon. The Wolfpack managed to track the ship to the Abregado system, where they discovered it was a Subjugator-class heavy cruiser. Plo Koon thought it was best to ask for reinforcements before attacking the massive ship, but they lost contact. Plo Koon ordered Commander Wolffe to open fire at the Malevolence, but Wolffe informed that they were out of range. Unfortunately the Malevolence had already fired its ion cannon which hit the Wolfpack fleet. The fleet was now vulnerable and the Malevolence opened fire destroying them one by one. Plo ordered his troops to get to the escape pods since there was no hope in winning the battle. When the fleet was destroyed the Malevolence launched a hunter to get out and finish off the remaining escape pods. At the same time Anakin Skywalker and Ahsoka Tano arrived in the Twilight. Meanwhile the hunter had found Plo Koon's escape pod, and went to take them out. Plo, Sinker and Boost managed to get out of the pod while Wolffe kept their signal alive. Plo and his troops fought off the droids and were saved by Anakin and Ahsoka. They managed to get away from the Malevolence and reported their discovery to the Jedi Coucil.

"It's Anakin's droid, R2-D2"
"Well, R2-D2, transmit the message you so obviously need to communicate"
―Ahsoka and Plo Koon as R2-D2 arrives in the Jedi Temple War Room to alert them of the situation on Vanquor[src]

When R2 managed to get to the Jedi council and showed them the hologram of Anakin and Mace Windu inside the wrecked Endurance, Plo Koon and Ahsoka Tano sat off with the Wolfpack to get them. They came down in gunships to get Anakin and Mace out of the destroyed bridge. While Plo and Ahsoka held the bridge steady Wolffe and Comet jumped in and got Mace and Anakin on the gunship.

"I believe you have worn out your welcome!"
―Plo Koon saving the rescue team on Lola Sayu.[src]

When it was confirmed to the Jedi that Obi-Wan and Anakin couldn't get off Lola Sayu with Even Piell and his men, Saesee Tiin, Plo Koon, Adi Gallia and Kit Fisto went to the prison planet to extract them. They gave Obi-Wan and the rescue team the coordinates to a small island which would act as a evac-zone. As the rescue team made its way to the evac-zone, a fleet of four republic cruisers engaged the separatist blockade. Master Plo and Commander Wolffe went down with a gunship escorted by Kit Fisto, Adi Gallia and Saesee Tiin in their Jedi starfighters. When the gunship hit ground they managed to get all the survivors onto the gunship and got back to the fleet.

During the battle of Felucia the 501st Legion and the Wolfpack made a night assault on one of General Grievous' last outposts in the system. Anakin and Captain Rex were leading the diversion on the front gate while Ahsoka and Comet, Sinker and Boost scaled the back-wall. Plo Koon, Wolffe and their team used jetpacks to fly over the side wall and surprise attack the enemy inside. After the battle they realised Ahsoka was missing. The rest of the night they spent searching for her, until next morning when they left the system.

"Look! Here's how it is: my orders are to deliver supplies and re-establish power and communication systems. Report back to the transport the moment that R2 unit has completed the download."
―An impatient Wolffe to C-3PO about the mission on Aleen[src]

Aleen was a planet hit by natural earthquakes which had killed many civilians and left their cities in ruins. Therefore the Wolfpack was dispatched to help them re-build and give them both food and medical supplies. During their mission on Aleen C-3PO and R2-D2 disappears, so Commander Wolffe is unable to communicate with the Aleena. Fortunately the two droids solve the problem by closing the tunnel down to the "underworld", and they regroup with the Wolfpack as they are about to leave the system.

As C-3PO, R2-D2 and Adi Gallia are held aboard Grievous' ship the Wolfpack moves to intercept and save Master Adi Gallia. No one are aware of that R2 and C-3PO are aboard. During their mission in saving master Gallia, they found the two droids aboard the ship after their adventure, which Plo stated Wolffe would be interested in hearing about, to Wolffe's frustration.

"Who said I was alone?"
―Anakin Skywalker upon the arrival of the Wolfpack rescue party.[src]

When the Wolfpack arrived Ahsoka got to the slaves and Anakin went to take out the gun towers since they were ray-shielded. Plo Koon and Warthog were distracting the enemy on the outside as Admiral Coburn and Wolffe managed to get their Arquitens-class light cruiser beneath the facility so Ahsoka and the slaves could make their escape onto the ship. Meanwhile a gunship came and picked up Anakin, Obi-Wan and Rex. When everyone was evacuated Plo Koon ordered his gunships to open fire on the facility and destroy it. 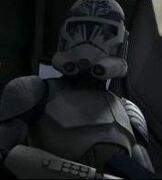 A squad of Wolfpack clone troopers

Sinker and Boost in Phase I armor

Wolfpack with Plo Koon aboard a Turbo Tank

Add a photo to this gallery
Retrieved from "https://clonewars.fandom.com/wiki/Wolfpack?oldid=84012"
Community content is available under CC-BY-SA unless otherwise noted.