"Of all the Jedi, why did I have to end up with Skywalker?"
―Wullf Yularen[src]

Wullf Yularen was an admiral during and after the Clone Wars. Yularen was a respected Admiral and honored his position. He was very dedicated to the Republic and to its Chancellor, Palpatine.

Admiral Yularen was with Jedi Generals Obi-Wan Kenobi and Anakin Skywalker when they tried to deliver supplies to Senator Bail Organa, but were stopped by Separatist forces led by Admiral Trench. Yularen recognized the symbol of the suposedly dead Admiral Trench, who was a super tactician. He didn't like the idea of attacking the Admiral because of his superior knowledge, but the Jedi did anyway. He wanted to accompany General Skywalker on the stealth ship, but was opposed. He was impressed after the defeat of Trench and spoke briefly with Anakin. He then sent forces down to the planet.

He was above the planet Christophsis when the real battle began; Generals Anakin and Obi-Wan led their forces against General Whorm Loathsom, however, it was impossible to get supplies from Admiral Yularen due to the Separatist blockade. He went back to Coruscant and got four more Republic Cruiser and Master Yoda went with him back to the planet and defeated the surrounding blockade and delivered fresh troopers and new supplies, right when the war was almost won by the Jedi.

He went to the planet Teth and sent down General Skywalker, Ahsoka Tano, and Captain Rex to the planet's surface. When the team got Rotta, they went to Admiral Yularen's flagship, but had to retreat because of the forces surrounding his ship. He went and picked up the Jedi from the planet Tatooine after they delivered the Hutt to his father, Jabba the Hutt.

"General Skywalker, you are nearing the coordinates where we lost contact with the shuttle."
"We can see it now. It doesn't look good."
―Yularen and Skywalker confer on the remains of Tup's medical shuttle[src]

In 20 BBY, Yularen served under Skywalker at the Battle of Ringo Vinda, in which the Republic entered a days-long stalemate with the Separatist forces on the space station that encircled the planet. When the Republic finally gained the upper hand with the support of Jedi Generals Tiplar and Tiplee, one of Skywalker's men, Clone Trooper Tup, lost his mind and executed Tiplar. He was subsequently captured and to be brought to Kamino for an extensive medical examination.

As the Nu-class Shuttle departed from the fleet, Admiral Trench, Yularen's old rival, deployed forces to intercept the shuttle and capture Tup. The Republic fleet lost contact with the medical transport as it was overrun and Tup was taken into Separatist custody. Yularen relayed the last known coordinates to Skywalker and the latter investigated the attack. 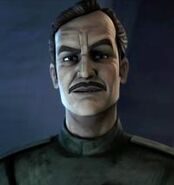 Admiral Yularen during the Clone Wars

Admiral Yularen early on in the Clone Wars