The Clone Wars
Register
Don't have an account?
Sign In
Advertisement
in: Articles needing expansion, Characters, Males,
and 5 more

View source
watch 02:07
Spider-Man: No Way Home Trailer Dropped - The Loop
Do you like this video?
Play Sound

"Smaller in number are we, but larger in mind."
―Yoda to Jek, Thire, and Rys[src]

Yoda was a small member of an unidentified species and Grand Master of the Jedi Order during the Clone Wars. The centuries-old Jedi Master resided primarily at the Jedi Temple on Coruscant overseeing the operations of the Order, who were co-ordinating the Republic's war effort against the Separatists. In addition to these duties, Yoda had also been known to command troops in the field.

Yoda had little to do with the battle before its climax, but after Wullf Yularen declared the battle over, Yoda began to sense something. He sent a messenger to the planet ahead of himself, along with a seven-strong fleet of Venator-class star destroyers. He arrived after the battle was over, aiding in the mop-up work. He enlightened the Jedi trio about Rotta's kidnapping and supposed location in his descent to the battlefield.

In 22 BBY, Yoda was challenged by Dooku and his Droid Army in a race to capture the likings of the Toydarians. He went with some clones to the moon of Toydaria–Jek, Rys, Thire, and Zak. As the Separatists ambushed them, all but Zak left for the planet. Yoda was the saving grace for the stranded clones, as the clones were wounded from droid blasters and tired, overall unfit to fight; Yoda destroyed a multitude of Battle Droids and AAT. He then sparred with Asajj Ventress, winning and sending the cowardly assassin off the moon, and the Toydarian King Katuunko signed a treaty with the Republic.

Yoda spoke with Plo Koon on his departure to find the Malevolence, and along with Mace Windu, consulted with him, Obi-Wan Kenobi, Ahsoka Tano, and Anakin Skywalker about the mission. Later on, Naboo, the Blue Shadow Virus, was unleashed. Like many previous missions, Anakin talked with council members, including Yoda.

Yoda's new 3D model for Season 5 of the Clone Wars. 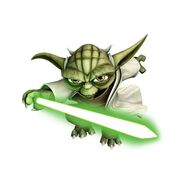